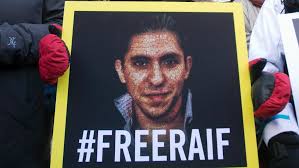 This month marks five years since the Saudi Arabian blogger Raif Badawi was arrested in Jeddah in June 2012. Almost two years later, in May 2014, Badawi was sentenced to ten years in prison, 1000 lashes, a huge fine, and two additional penalties – a ten-year travel ban and ten-year ban from participating in visual, electronic and written media, both to be applied following his release.  Raif has now served nearly half of his ten-year prison sentence and the campaign for his release, championed by his remarkable wife Ensaf Haidar, continues.English PEN was honoured to co-host Haidar during a recent trip to the UK, along with our colleagues at Reporters Without Borders. Haidar met with key human rights and free expression organisations active on her husband’s behalf, took part in a number of media interviews, and attended a special vigil at the Saudi Arabian Embassy, joined by many of her and her husband’s friends and supporters.Haidar also spoke at an event hosted by Doughty Street Chambers, at which she delivered a moving statement about her husband’s ongoing detention, translated by Bayan Abughaida:

Today I carry a message from my husband and my three children who have been deprived of their father for exercising a natural right to express his opinion.

I bring you a message of hope that one day, I will see my husband, Raif Badawi, standing among you on this platform, to talk to you about freedom and human rights, to tell you how freedom cannot be incarcerated, flogged, or executed. No matter how hard some try.

I also carry a message of determination:

A determined Saudi woman, standing here, and saying that a peaceful transition in Saudi Arabia is possible. With this new generation, the generation of globalisation, Internet, and blogs; ideas can no longer be prevented or blocked. It is a new change, a new revolution, from Morocco to Jakarta, young people today will determine the future and we must support and stand by them. Thus, your role here is participating in this change.

Raif Badawi’s message can be summed up as follows: The peaceful expression of opinion and thought is a non-negotiable human right, which is the right of all human beings with no exception.

However, the real prisoners are those who can defend freedom but do not….

Raif has not lost hope, but he is mentally and physically suffering from this unjust sentence. I can tell you that he is fine and very optimistic, but I will be lying. His mental health is worsening. So I beg you for more mobilisation and solidarity. What frightens every detainee is to be forgotten by the supporters of freedom.

Join our protest at the Saudi Embassy

To mark the five year anniversary of Raif Badawi’s arrest and the birthday of his lawyer Waleed Abu Al-Khair, who himself is currently serving a 15-year prison sentence, English PEN will be hosting a vigil at the Saudi Embassy in London and continuing to call for their immediate release.

We will be joined by colleagues from Bread and Roses TV, Campaign Against Arms Trade, Council of Ex-Muslims of Britain, Index on Censorship, One Law For All, the Peter Tatchell Foundation and Reporters Without Borders. Please join us if you can.

NB Activists are asked to meet at the Curzon Street entrance to the Embassy. (note: the postal address of the Embassy is 30-32 Charles Street, Mayfair, London).

Please keep sharing details of Raif Badawi’s case and calls for his release on social media. Follow @Raif_Badawi on Twitter and tweet your support with the hashtag #FreeRaif

We are aiming to get 1000 images to represent the 1000 lashes to which Raif has been sentenced. As well as helping to raise and maintain awareness of his case, these photos will serve as a powerful visual representation of the widespread support for Raif and his family .

Please share your photo, ideally with details of where it was taken (eg Embassy of Saudi Arabia, London, UK), with us before the 17 June 2017.

Send us your photos

Via Facebook: Please tag English PEN Writers at Risk in your photos, and use the hashtag #FreeRaif https://www.facebook.com/English-PEN-Writers-at-Risk-78698626750/

Via Email: Please email your photos, with the subject line ‘Free Raif photo’ to cat@englishpen.org