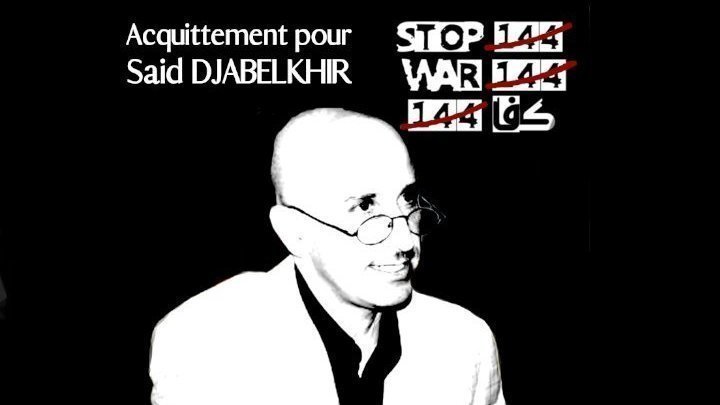 Sign a petition demanding release of Said Djabelkhir who has been sentenced to three years for ‘offending Islam’ in #Algeria.

Islam is a belief that must be open to criticism & doubt. Real offence is violation of free conscience & expression.
STOP 144
كفا 144
Sign petition:
https://www.change.org/p/haut-commissariat-des-nations-unies-aux-droits-de-l-homme-stop144-solidarite-avec-said-djabelkhir
#BlasphemyNotACrime

TRIAL OF THE INQUISITION: ISLAMIST NEPOTISM

On April 22, 2021, Saïd DJABELKHIR, an Islamologist, was condemned by an Algerian court to 3 years in jail following the complaint lodged by Abderrazak BOUIDJRA, a computer engineer, supported by some people from the Islamist movement, citing article 144 bis – an attack on the precepts of Islam – saying he was affected by the statements and publications of Saïd DJABELKHIR.

A specialist in Sharia jurisprudence, Professor Saïd DJABELKHIR speaks often about freedom of thought, conscience, respect for individual and collective freedom as inalienable fundamental rights prior to the establishment of any democratic Republic.

Judicial harassment and persecution against Saïd DJABELKHIR, likewise against civil society activists, journalists and bloggers are the methods used by the Islamists to silence and prevent any philosophical and scientific debate imposing their retrograde vision to Algerian society.

Academic freedom is the fundamental bedrock for a Nation to access development, even more, when scientific work is a strategic issue for the State as it is today.

Subjecting academic freedom to inquisition is a danger for any State and entire humanity. All the fields of knowledge must be free from any political and religious manipulation, evading the contingency of the populist Islamist masquerade. Whereas in the 12th century, Averroes (Ibn Rushd), in his “Fasl el Makal”(1) affirmed the legitimacy of philosophy and debate in matters of exegesis. Nine centuries later, the connivance between “conservative-bigots” (or Islamo-conservatives) and the authorities legalize this inquisition by the very fact of registering the complaint against Professor Saïd DJABELKHIR.

The civil character of the State must be effective. Algerian justice and its magistrates have shown by this penal sentence that freedom of conscience doesn’t exist any more in Algeria.

After Yacine MEBARKI sentenced to one year in prison in November 2020 by the Khenchela Correctional Court for promoting atheism, claiming the right to secularism in an article published on Facebook, we are witnessing the criminalization of consciences and of the intellectual and scientific activity. This constitutes a major threat for the freedom. This legal action is a violation of international human rights conventions ratified by Algeria guaranteeing freedom of conscience. Once again, it demonstrates the condition of decomposition of a submissive, repressive justice, which has now become an ideological instrument of obscurantism and of intolerance.

This article of law is conceived as a sword of Damocles suspended above the heads of the Algerians, appears to be a contingent political instrument in the hands of the political strategies of the moment. The rule of law is built on principles and not ambiguities. Articles of law 144 and 144 bis which violate freedom of expression must be revoked altogether.

Today, the supporters of democracy and freedom of conscience in Algeria, North Africa, the Middle East, Europe, the Americas, entire Africa and Asia, must come forward without any concessions, facing the Islamist ideology and its nepotism. It is the elaboration of our societies which is at stake.

· Denounce this sentence and demand acquittal of Said DJABELKHIR and the immediate and unconditional release of prisoner of conscience and the end of all legal proceedings invoking the bill 144 bis or any other disposition of opinion crime.

· Require that the Algerian State complies with its international commitments in terms of respect of fundamental freedom, freedom of speach, of opinion and conscience.

· We call on international bodies to condemn the Algerian state for violating international treaties guaranteeing the respect of human rights.

· We call on the international community to support and demand acquittal of Said DJABALKHIR and the release of prisoner of conscience.

2)  Other people are detained or are the subject of ongoing proceedings for the same reasons, without being exhaustive, we can cite Djamal Azaim, Amira Bouraoui …