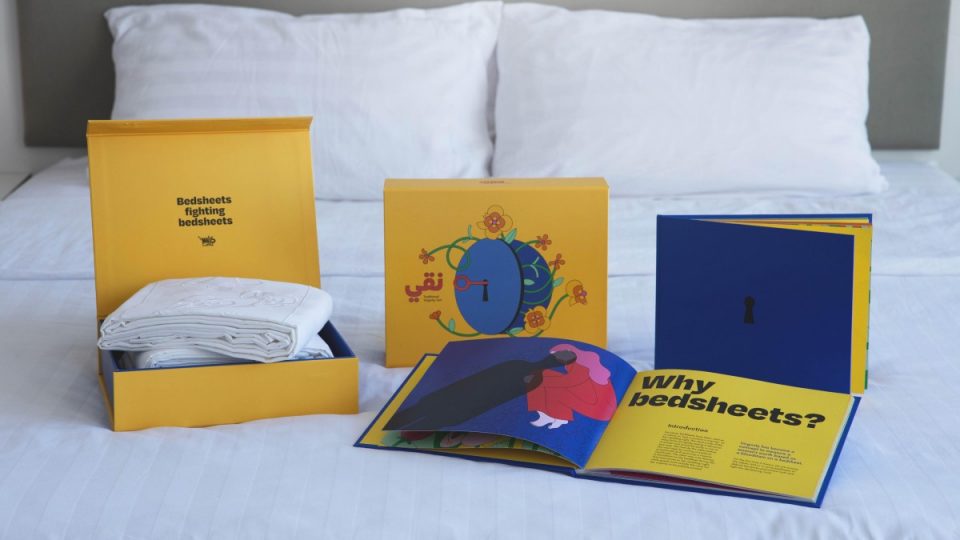 By CEMB February 16, 2021 13 mins read
Share
#StopVirginityTest
#stopart488 #Maroc #Iran
http://traditionalvirginitytest.com
We fully support Mouvement Alternatif pour les Libertés Individuelles – Maroc and Ibtissame Betty Lachgar in their launch of the “Traditional Virginity Test” campaign, introducing sets of blank bed sheets that denounce and fight the demeaning ritual of ‘virginity testing’.
• There is no scientific evidence of a woman’s virginity1.
• A study on 36 pregnant women from 2004 showed that 34 of them still had an intact hymen2.
• Only 50% of women bleed during their first intercourse3.
M.A.L.I. Movement has chosen February the 14th, Valentine’s Day – a day that epitomizes love and togetherness, to launch a campaign against women’s ‘virginity testing’, breaking the myth of the ‘unbreakable’ hymen and shedding light on a patriarchal concept that still roams around the world, even in modern societies: ‘women’s virginity’ ; a symbol of women’s oppression.
For years, bed sheets have been used for ‘virginity testing’. The ritual is performed in Morocco and many countries across Middle East and North Africa to prove a woman’s ‘purity’, basing her worth on a bloodstain. During the night of the wedding, guests wait outside the room for the virginity to be publicly proved after the first intercourse. Not bleeding can be life-threatening and might include physical and verbal abuse, shunning, divorce, rape, ‘honor killing’ and suicide, affecting the women’s fate, the fate of their family, their ‘honor’ and safety.
M.A.L.I. is turning the tables by using the bed sheet to debunk the hymen myth and fight this demeaning ritual. The campaign’s hero asset, the bed sheet is packaged in a colorful crafted box, including a 24-pages informative booklet describing the perils of ‘virginity testing’ and denouncing this retrograde and sexist practice. The bed sheet kit is listed for sale on an exclusive microsite (traditionalvirginitytest.com), where visitors are surprisingly re-directed to a series of real-life testimonials and facts, upon adding the product to their carts.
M.A.L.I. Movement once again raises awareness concerning the virginity myth, hoping to incite a positive change and inspire the abrogation of article 488 of the Moroccan penal code, which allows ‘virginity testing’ on girls and women that have been victims of rape and accordingly, inflicts more severe punishments against the perpetrator for raping a “virgin” woman than a “non-virgin” one.
The spokeswoman of the movement, Ibtissame Betty Lachgar, said: “The virginity membrane is a patriarchal and archaic concept used as a mean to persecute women all over the world and has no scientific validity. Controlling women’s body and sexuality is a women’s rights violation. ‘Virginity testing’ is a humiliating practice, an act of torture and a sexual violence that can lead to harmful psychological – as well as physical – health consequences. This barbaric practice should be abolished immediately”.
Walid Kanaan, Chief Creative Officer at TBWA\RAAD said: “We are proud to put our creativity at the service of a good cause and raise awareness to such a controversial issue. It is really disappointing and frustrating to still witness today, despite all of the advancements that we humans have achieved in technology, healthcare, education and science, such an unfair practice against women. There should instead be a strong focus on diversity, inclusion and gender equality.”
1. https://www.who.int/reproductivehealth/human-rights-day/en/
2. https://www.theguardian.com/…/hymen-virginity-tests-us-ti
3. https://www.tandfonline.com/…/10.3109/13625187.2011.649866
0 comments 248 views