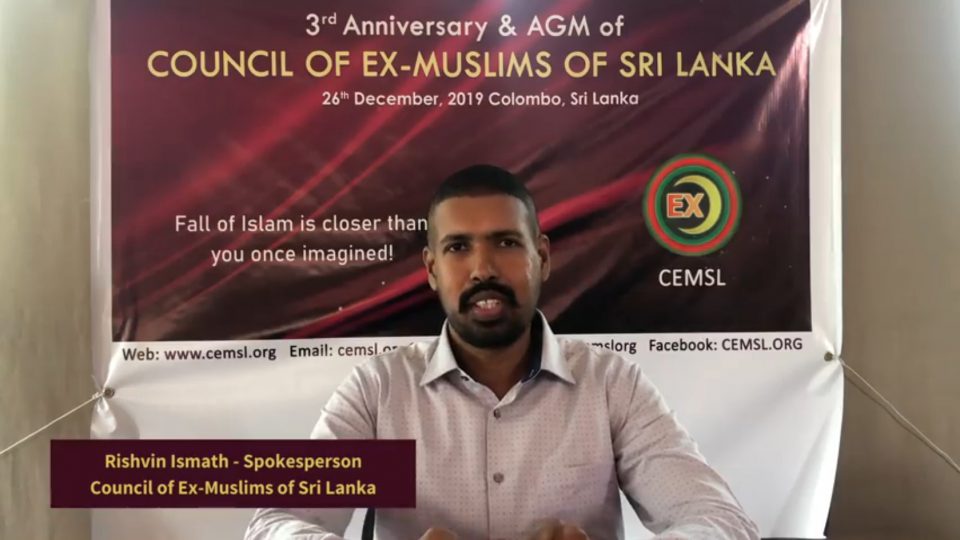 Rishvin Ismath must be protected from Islamist threats to his life

Rishvin Ismath is a former Islamist who co-founded the Council of Ex-Muslims of Sri Lanka. He is the first
public ex-Muslim in the country, declaring himself an ex-Muslim atheist before a Parliamentary Select Committee in 2019.

Ismath was recently threatened inside the Presidential Commission of Inquiry premises by an Islamist.

This took place after he was given the opportunity to cross examine Rasheed Hajjul Akbar, the former leader of the Sri Lankan Jamat e Islami for 24 years until September 2018 at the Presidential Commission of Inquiry probing into the 2019 Easter Sunday Attacks. Ismath asked him about his propagating armed struggle, sending Sri Lankan Jihadi fighters to Kashmir, Afghanistan and Pakistan and about rejecting Sri Lankan law in favour of Sharia.

When Ismath was leaving the session, two individuals in the commission parking lot who had come with Rasheed Hajjul Akbar. threatened Ismath. He informed the secretary of the commission and the matter was relayed to the judges of the commission. Chairman of the Commission – Court of Appeal Judge, Justice Janak de Silva, issued an order to National Authority for the Protection of Victims of Crimes and Witnesses to take the necessary steps. Ismath has also made a separate complaint to the police. This has been reported in local media.

Council of Ex-Muslims of Britain condemns ongoing Islamist threats to Rishvin Ismath’s life, is extremely concerned about his well-being and urges the authorities to guarantee his safety.