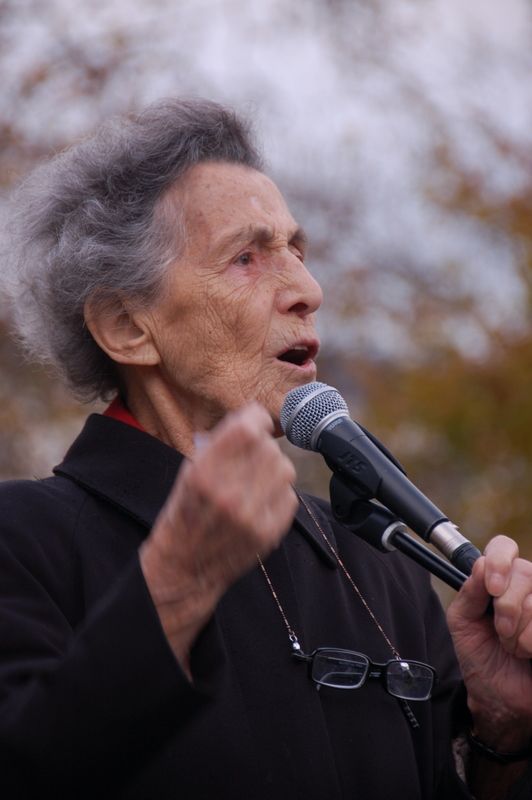 She joined campaigns in support of One Law for All against Sharia and religious laws and Council of Ex-Muslims of Britain against blasphemy and apostasy laws and for secularism, reason and universal rights over a decade ago. She edited “Sharia Law in Britain: A Threat to One Law for All and Equal Rights,” attended events, leafleted in solidarity with the protesting people of Iran and against Sharia law, did interviews, including with Bread and Roses TV on anti-Semitism and spoke up at public events and rallies. As one of the main speakers at a rally in Hyde Park in 2009, she gave a scathing criticism of cultural relativism and unequivocally defended human rights for all. She ended her speech there with a refrain from a song from the labour movement: “Which side are you on? We are all on the side of those who fight for freedom.”

Muriel was a fighter through and through and right until the end. Her last book “Marx and Humanism” was written this year; her other books included: “Bread and Roses: Nontheism and the human spirit,” “The Changing Faces of Antisemitism,” “What’s Left? What’s Right?: A Political Journey via North Korea and the Chinese Cultural Revolution,” and “Thomas Harriot’s Artis Analyticae Praxis: An English Translation with Commentary”. She was a comrade, a generous friend and an excellent human being.
We will miss her fierce and courageous mind and activism, her enthusiasm, her love and her kindness more than we can say.
We were lucky to know her and to have her in our lives. All we can do now is to celebrate her memory by carrying on “on the side of those who fight for freedom.”
Muriel’s funeral service will be held on Friday 3 January at 1:15pm at the North Chapel, Eltham Crematorium, London SE9 2AZ.
Dress Code: No black please.
Also, no flowers.
Donations to Council of Ex-Muslims of Britain.
Muriel Seltman
0 comments 245 views