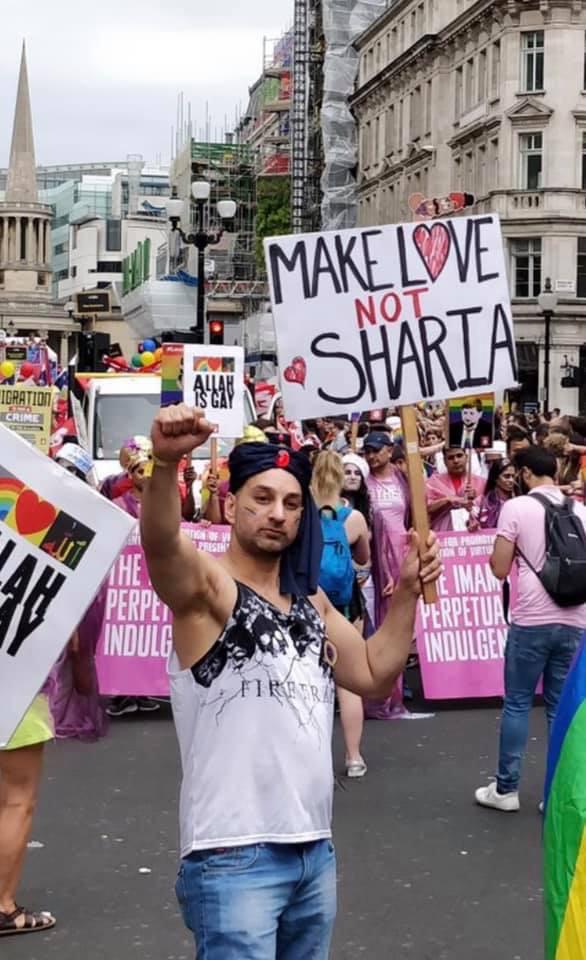 We understand intolerance better than most; Blasphemy is not Bigotry

On 15 July, Council of Ex-Muslims of Britain (CEMB) wrote to the newspaper Het Parool to ask for a right to reply to a piece by Dino Suhonic, director of Maruf platform for queer Muslims in the Netherlands where a number of intentionally false statements were made about the CEMB and our fight for LGBT rights of Muslims and ex-Muslims as well as the rights to apostasy and blasphemy at Pride in London.

CEMB urged the publication to rectify the falsities. Suhonic clearly has a right to criticise our organisation and work but the use of false statements to ‘prove’ his points was unethical and libelous and aimed only to damage and defame.

ON 16th July, we received an email from the publication – see below – saying that one of the mistakes in his piece was rectified but the more important false claim on far-right support was not. We were told that since we were not a Dutch organisation, we could not publish our opinion piece but that they would consider a letter to the editor. We sent a shorter letter to the editor on 17th July (it was even translated for their ease) and though we emailed a number of times inquiring about its publication, we have yet to see our letter published and are therefore making it available to the public.

The longer opinion piece in Dutch was published today on Vrij Links. You can read it here.

The English version of the opinion piece is below, as is the email received from the paper and our shortened letter to the editor, which was never published. UPDATE: After a number of contacts with the publication, our short letter to the editor was published on 31 July 2019. You can see the letter here.

SHORTENED LETTER TO THE EDITOR IN ENGLISH

Mr. Suhonic has made false claims regarding Council of Ex-Muslims of Britain (CEMB). We are one of the largest and oldest progressive ex-Muslim groups worldwide. We defend LGBT rights of ex-Muslims and Muslims and the rights to apostasy and blasphemy. In struggling for these rights, we enact the rights that we demand. We blaspheme to win the right to blasphemy and reject religion to defend the right to apostasy. This public resistance when we can be shunned or killed for celebrating who we are is particularly apt to Gay Pride. Like women demanding the right to vote or blacks demanding an end to Jim Crow laws, we will blaspheme until we will no longer be killed for it. This may cause Mr Suhonic offence but defending the rights of those that offend religious morality has always been a cornerstone of progressive politics. After all, there are some Muslims who are offended by those who are Muslim and gay. Offence cannot be justification to deny minorities within minorities their rights. Mr Suhonic’s conflating blasphemy with far-Right support is like absurdly conflating his belief in Islam with support from Islamism! For us, Islamism is our far-Right and fundamentally no different from other religious-Right and racist movements. Bigotry affects us and our families too but we will not excuse fundamentalism because of racism nor racism because of fundamentalism.

DUTCH LETTER TO THE EDITOR

EMAIL FROM THE PUBLICATION

Dear Mrs. Namazie,
Thank you, for your email and taking the effort to translate it to Dutch. After consulting with the author, I have made some changes to the article on our website. The sentence about the “Fuck islam-placard” has been removed. I added an editorial comment at the bottom of the article. Mr. Suhonic asked me to tell you he regrets his mistake.
Regarding your comment about the support for CEMB, I clarified in the article that Mr Suhonic meant “support on social media”, not financial support.
I would like to offer you the chance to reply and clarify your activities and position, however a full opinion piece would be too much, since you are not a Dutch organization and the remarks about your activities in Mr. Suhonic article are not the focus of the article. You are welcome to write a short response (around 150 words), which I will consider for publication in the ‘Letters to the newspaper’ section.
Met vriendelijke groet, kind regards,
Jesse Beentjes
Coördinator Het Hoogste Woord
Jacob Bontiusplaats 9, 1018 LL Amsterdam

To whom it may concern

Your newspaper Het Parool published a piece by Dino Suhonic, director of Maruf, platform for queer Muslims in the Netherlands where a number of intentionally false statements were made on the Council of Ex-Muslims of Britain and our fight for LGBT rights of Muslims and ex-Muslims as well as the rights to apostasy and blasphemy.

CEMB urges your publication to rectify the falsities. Suhonic clearly has a right to criticise our organisation and work but the use of false statements to ‘prove’ his points is unethical and libelous and aims only to damage and defame.

The false statements are as follows:

“This group has previously been accused of spreading Muslim hatred by using slogans such as ‘Fuck Islam’.” Firstly, CEMB never had a placard that said ‘Fuck Islam’ but ‘Fuck Islamic Homophobia’. Criticising religious homophobia is integral to the fight for the rights of minorities within minorities and dissenters. Blasphemy and apostasy are not hatred against believers but a challenge to religious ideas and dogma. The conflation of criticism of religious dogma or the religious-Right with hatred against believers is an attempt to impose blasphemy and apostasy laws where none exist.

Your paper can see information and footage of our participation at Pride over the three years. There is no ‘Fuck Islam’ placard. In any case, opposition to a religion or belief is not bigotry against people.

CEMB march at Pride 2018 in London: A Victory against Islamism

Open Letter to Pride: Defend the Council of Ex-Muslims

“They receive support mainly from right-wing groups, who show their solidarity by jointly fighting ‘against the Islamisation of Britain’.”

CEMB is a progressive organisation that works with other progressive organisations, many of them minority-run, anti-Racist and anti-cultural relativist. We are unequivocally against Islamism and all other far-Right movements. We see Islamism as far-Right too and believe the stop Islamisation groups are fundamentally no different from the Islamists. They are fundamentally misogynist, homophobic, anti-Semitic, xenophobic, and rely on religion, hate and violence to further their cause. CEMB is an anti-racist organisation that always defends the rights of Muslims and migrants despite any differences in belief. You can see some of our recent statements or interviews here that clearly show our position:

Making a stand against all forms of hate

CEMB fights on many fronts, against religious dogma, for the rights of women, LGBT, freedom of conscience and expression (which includes freedom from religion and atheism) and against racism and xenophobia… We won’t remain silent about fundamentalism or religious dogma because of racism or vice versa. We think we must fight them all in order to fully defend universal rights.

CEMB calls on your publication to give us the right to reply in your paper. The piece by Jimmy Bangash is below.

We look forward to your immediate response.

Dino Suhonic’s article covering the Council of Ex-Muslims of Britain (CEMB) at Pride in London in Het Parool displays a poor understanding of the issues of apostasy and homosexuality impacting individuals of Muslim heritage. The article is littered with false claims, conflates blasphemy and apostasy with bigotry against believers and fails to acknowledge that Pride is a space for criticism of religion and the religious-Right.

It is deeply disappointing to see this article published without any attempt to fact check the absurd claims made by an individual so removed from the realities of our members’ lives – members who are predominantly from diaspora communities or are themselves refugees, hailing from Muslim-majority countries such as Iran, Pakistan and Bangladesh.

Our organisation stands for universal human rights to be applied to all people across all countries. We have a longstanding history of working to support apostates internationally in Islamic states and supporting refugees and asylum seekers in the UK and internationally. We have unequivocally defended Muslims as can be seen from our work, including condemnation of China’s treatment of Muslims and Chechnya’s treatment of LGBT Muslims.

We actively oppose far-right and racist organisations, many of whom seek to attack us as foreigners. We also have Muslim families who are affected by bigotry and we face added pressures and threats from within because we are LGBT and/or ex-Muslims. We, therefore, understand better than most the vile effects of bigotry and the need to stand up to it unequivocally. We consistently stand for the human rights of all. Again, much of this commitment is visible with even a cursory glance at our work over 12 years.

Life for LGBT people of Muslim heritage can be bleak. For many it involves living a closeted existence within Muslim ‘communities’ for fear of being ostracised or disowned. Religious institutions and theological teachings espoused by ‘community leaders’ range from preaching for our execution, through to advising us to live a life of celibacy. With 52% of polled British Muslims stating that homosexuality should be illegal and 47% stating that it is unacceptable for a gay person to become a teacher, it is clear that our ‘communities’ are the most homophobic within the UK.

Pride provides a safe place to challenge this religious homophobia. Since its inception, Pride has been a place where LGBT people have been able to rally against political, cultural, and religious condemnation of homosexuality.

Whether it is gay ex-Muslims (GEMs) protesting with placards stating “Fuck Islamic Homophobia” and condemning the Islamic states that have the death penalty for homosexuality, or gay Muslims attempting to redefine the position of gays within Islam with placards of “Allah Love us All”, Pride currently provides the only safe place to galvanise public awareness to the diverse protests and messages of LGBT of Muslim heritage. A safety which is not afforded to us, on any level, by the wider Muslim ‘communities’.

For us, our presence at Pride has been hugely important because we have members who are LGBT and/or refugees who have fled countries where homosexuality is punishable by death. Many of the same Islamic states that kill LGBT, also kill apostates and blasphemers. Our presence is, therefore, crucial because it aims not only to defend LGBT rights of ex-Muslims and Muslims but also to push open the shrinking spaces for religious doubt and dissent. Our placards embody the dissent against religious dogma that has always been an important part in the fight for human rights. Just as criticism of Christianity or the Christian-Right at Pride are not hatred towards Christians, so too our placards and presence have nothing to do with hate and everything to do with the demand for human rights for all. The right to be gay, be an apostate or to be a blasphemer without fear, ostracisation or threats to our lives.

Pride is one of the very few public spaces where we can come out, loud and proud – as LGBT and/or ex-Muslims – without fear. This is something we will continue to do despite vilifications and misinformation promoted by Dino Suhonic and others like him who cannot see how the rights and lives of LGBT and ex-Muslims are linked. To defend the rights of one we must defend the rights of all despite differences in beliefs and opinions.

Translations into Dutch by Leon Korteweg