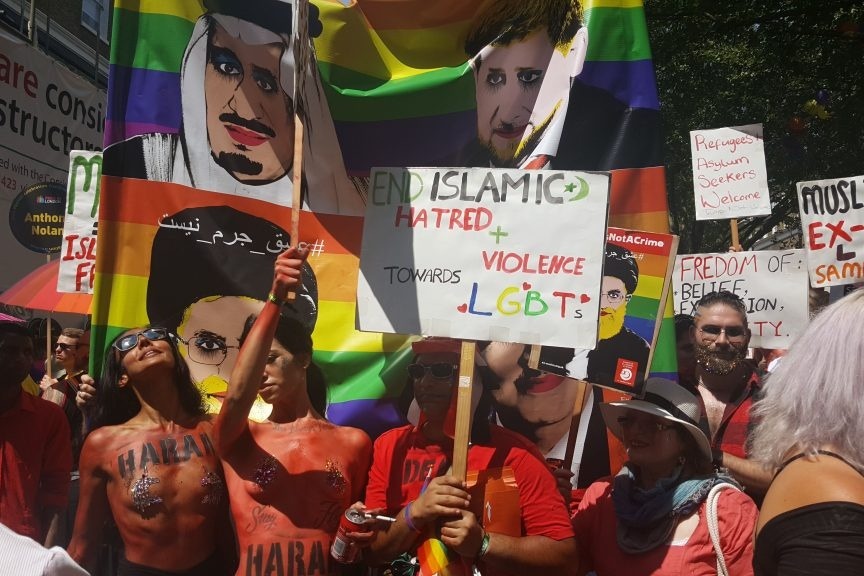 Council of Ex-Muslims of Britain (CEMB) has fought hard to take part in Gay Pride after the East London Mosque and Mend (Islamist bodies) filed official complaints in 2017 with Pride for our ‘Islamophobic’ placards. It took Pride 8 months to finally allow us to march again in 2018 after we stressed the importance of normalising blasphemy when one can be killed for it.

Since our first participation in Pride, we have worked hard to explain the difference between apostasy/blasphemy and bigotry, to show how minorities within minorities have the right to think and live differently, highlight how homophobia is a pillar of the Islamist movement and that LGBT rights are intrinsically linked to the rights of other minorities, like ex-Muslims and women. We have also tried to reach out to Muslim LGBT groups.

Also, CEMB works with a large number of refugees and asylum seekers, all of whom are apostates and some of whom are LGBT. Pride is particularly important to our members as one of the few public spaces where ex-Muslim and gay members can openly assert themselves without fear.

Our work is particularly important given the recent religious justification of homophobia at the Parkfield school in Birmingham and the new stoning sentence for homosexual in Brunei. CEMB is the only group that is critical of Islamic homophobia, focuses on the death penalty in Islamic states, and attempts to normalise and celebrate LGBT rights as well as apostasy and blasphemy.

This year, in July 2019, CEMB will hold a panel discussion bringing together both Muslim and Ex-Muslim speakers to talk about LGBT rights, apostasy and blasphemy. It will be an evening of film, poetry and raise important questions that are matters of life and death for many of us.

We will also be marching again in Gay Pride.

Both the evening event and Pride march will help us highlight the existence of both Muslim and apostate LGBT and will assert the human right to live as we choose, without threats, shunning or persecution.

The funds raise via this crowdfunding page will go towards the organising of the evening LGBT event, including a panel discussion, film screening and poetry. Costs include venue costs, travel and accommodation of speakers and security costs. The funds will also help us establish an exhibition of our iconic actions in defence of gay rights and apostasy, which will be shown at the event.

Thank you so much for those of you who are able to donate; without you we will not be able to carry out our important work, which makes such a difference to the lives of those forced to suffer in silence or forced to live in the closet – be that the LGBT closet, or the apostasy closet.

Council of Ex-Muslims of Britain (CEMB) is both a support service and a campaigning group for the right of individuals that have left Islam.  We exist because apostates from Islam, blasphemers and atheists are executed in a large number of Islamic states. Their only crime being to think for themselves. The very same states, and more – 15 to be exact – also punish homosexuality with the death penalty. Brunei’s new law punishes homosexuality with death by stoning. This, along with protests by fundamentalists in the UK to shun and vilify LGBT and ex-Muslims stresses the importance of our continued defence of the rights of LGBT and ex-Muslims whose lives and rights are intrinsically linked.

Our demand is simple. Equality for all. Individuals ahead of ideas.