VIDEOS AND PHOTOS OF THE EVENT ARE BELOW.

March 23rd, International Atheist Day, was observed for the first time across the world, providing a space for non believers to come out in public, defend freethought and show solidarity with those who risk their lives and freedom because they are atheists. 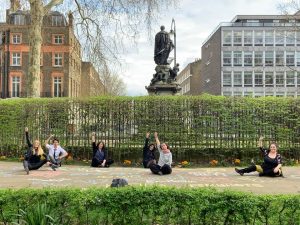 In London, CEMB organised a direct action where atheist women came together to paint slogans around “There is no God” in chalk in Russell Square in various languages. Photographs of women sitting on the floor with legs akimbo were in solidarity with women across the world who are being sexually assaulted for fighting for their rights and told to ‘sit properly’, ‘be decent’ and threatened with rape for claiming the right to their bodies. It was in particular a show of solidarity with women involved in the aurat march in Pakistan.

This action was followed by an emotional evening MCed by Nahla Mahmoud. Maryam Namazie gave a brief opening address on the need for an Atheist Day; this was followed by a panel discussion of ex-Muslim women speaking out including with Ibtisamme Betty Lachgar, Mimzy Vidz and Zara Kay along with Sadia Hamed and Maryam Namazie. Whether coming from secular or fundamentalist families, the women agreed that losing the fear of challenging God was central. In an intimate discussion which ranged from attempts at exorcism by families determined to ‘fix’ their errant children, to the joy of embracing freedom, they agreed they could never look back. Audience members assured them that they had gained a family in the global ‘community’ of ex-Muslims. Panelists condemned bigotry against Muslims while affirming their right to criticise Islam and Islamism.

One speaker, the poet Halima Salat, who is resident in Amsterdam was denied a visa by the British Home Office. She came out for the first time at Maryam Namazie’s Freedom Lecture at De Balie a few months back and there was great disappointment that she couldn’t join the event, showing how the hostile environment is never far away for apostate refugees. Halima performed her poetry on FGM and against Patriarchy via video link and was able to hear the cheers for her passionate work.

In continuation of a tradition established by CEMB, Apostasy or Coming Out Certificates were awarded to a number of people, namely Ezatullah Qoriashi, Kishore Talukder, Md Badrul Alam, Mehrdad Taheri, Shagota Sarwar and Shahab Khan.

Moreover, CEMB 2019 Awards were presented to those who showed dedicated support to the ex-Muslim movement, namely AC Grayling who has supported the movement since the beginning and Ana Gonzalez of Wilson Solicitors for her immense support for apostate refugee cases and the CEMB; she said that CEMB was the most caring group she had ever worked with. Also awards were given to Asad Abbas for being one of the first and most persistent of CEMB members, Ibtisamme Betty Lachgar for her courageous work in Morocco, Inna Shevchenko of Femen for inspiring CEMB’s topless protests, Mina Ahadi for founding the first Council of Ex-Muslims in Germany and Shelley Segal for being a voice for atheism and ex-Muslims. Awards were also given to two absent friends, the filmmaker Nadia El Fani and Atheist Republic Founder Armin Navabi.

Shelley Segal sang Our Resistance and her new anthem for CEMB and ex-Muslims called ‘Find our Way to Freedom,’ which premiered at the event, after which atheists and ex-Muslims joined her on stage for a sing along.

An exhibition by SAMINT used art as a weapon against patriarchy and extremism. The evening ended with dancing to tunes by DJ Zee Jay.

The first Atheist Day in London and across the world was a resounding success. Onwards towards #AtheistDay2020!

PANEL OF EX-MUSLIM WOMEN SPEAKING OUT