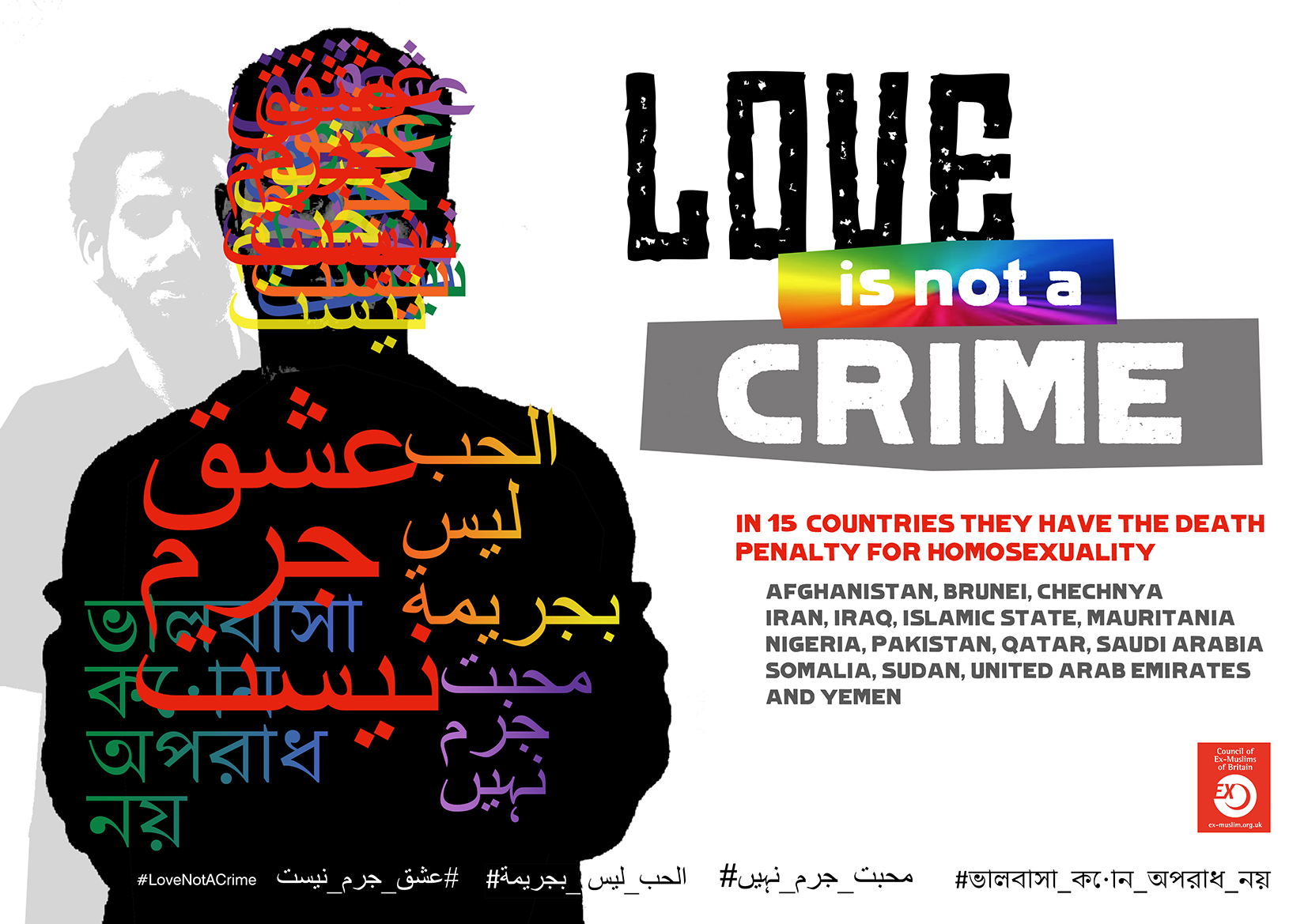 Amnesty International and All-Out: Be honest about Sharia

Council of Ex-Muslims of Britain (CEMB) is horrified to learn that Chechnyan authorities have begun a new wave of attacks on LGBT. At least two people have been tortured to death since December 2018; another 40 are being detained and tortured as we speak.

CEMB marched in Pride 2017 for the first time to highlight the plight of LGBT in countries and territories under Islamist control and in particular the harrowing roundup, detention and torture of LGBT people in Chechnya. At the time, its president Ramzan Kadyrov had expressed the desire to “eliminate” gay people “before the start of Ramadan.” The purge resulted in dozens of gay men being abducted and tortured and others being killed. Like now, much of the persecution is taking place in a camp near Argun, a town about 10 miles east of Grozny, the Chechen capital.

Whilst various LGBT and human rights organisations are rightly calling for urgent action in defence of LGBT in Chechnya, and calling on the Russian government to take action since Chechnya is part of the Russian Federation, they are nonetheless failing to highlight the role of the Islamist state and Sharia in the persecution of LGBT in Chechnya.

When asked by a supporter why Amnesty International wasn’t mentioning Sharia, for example, the AI Supporter Communication Team (see full correspondence below) said:

“To blame Shari’a law is a gross misunderstanding of the complexities and interpretations of Shari’a, Fiqh and Islam. Nowhere in the Quran is it mandated that gay men can be rounded up, put in concentration camps and executed. Blaming Shari’a law also provides an excuse for those perpetrating such gross violations. No religion is to blame for the actions of the Chechen authorities. Their total disregard for life and liberty is to blame instead. We are going to have to agree to disagree on the importance of Shari’a law on this issue.”

“Chechnya is a region within the Russian Federation; as far as we know, they do not have a code based on Sharia Law.”

Whilst Chechnya is part of the Russian Federation – Russia also, by the way, discriminates and persecutes LGBT – Putin has empowered local leaders to enforce their interpretation of Sharia. In an interview, Kadyrov himself said there were no homosexuals in Chechnya but added: “And if there is, take them to Canada, praise be to Allah, away from us … to purify the blood.” He called homosexuals shaytan (devils) and said: “They are not people. And damn them for slandering us.”

In fighting for LGBT rights, particularly in countries under Islamist control, it is crucial to note the role that religious law plays in persecution. Last year, the Global Summit on human rights defenders warned “religious fundamentalism and extremist policies are all on the rise.”

Coalitions in which Amnesty International participates have warned that “In its extreme form, fundamentalism sanctions the destruction of the members of the excluded group” and that “Fundamentalist actors attack sexual rights advocates by labeling them as blasphemous or as ‘atheists’; as ‘bad’ Christians/Hindus/Muslims, or refer to their work as ‘Western imports’ or ‘anti-national’ in order to discredit them and undermine the effectiveness of their work.”

Attitudinal change has long been recognised as crucial to human rights work and human rights activists across the world need international organisations to be able to name and investigate the full range of threats against them.   All 14 countries and territories that punish homosexuality with the death penalty, for example, implement Sharia in one form or another: Afghanistan, Brunei, Chechnya, Iran, Iraq, Mauritania, Nigeria, Pakistan, Qatar, Saudi Arabia, Somalia, Sudan, UAE and Yemen. Similarly, all the countries that punish apostates and blasphemers with the death penalty likewise implement Sharia. Whist LGBT are discriminated against, face persecution in many other countries too, there is a clearly link between Islamism’s use of Sharia and massive human rights violations that cannot be negated, ignored or explained away.

CEMB calls on human rights groups to honestly address human rights violations where religious rules and laws are applicable and put human rights above the protection of cultures and religions.

CORRESPONDENCE WITH AMNESTY INTERNATIONAL AND ALL OUT

Thank you for your reply. As a gay man and recovering catholic I know the crucial part religious ideology plays in the denial of human rights. To deny that Islam is not a crucial part of the problem in the countries that have the death penalty for gays, when all ten of those countries are Islamic, is called a state of denial.  I’m afraid I can’t help you with that. I will continue to support Amnesty International, having first joined at university in Ireland in 1979 and because you are engaged in vital struggles for the rights and dignity of oppressed people, including my LGBTQ brothers and sisters. Thank you sincerely for your efforts and especially for those who operate in dangerous countries and risk their lives and freedom to do so.

Thank you for your phone call yesterday, and your subsequent emails. We understand and share your concern and distress with regards to the situation in Chechnya.

We are not skirting crucial facts. The crucial facts are that LGBT people, specifically gay men, are being subjected to horrendous abuses of their human rights in Chechnya.

To blame Shari’a law is a gross misunderstanding of the complexities and interpretations of Shari’a, Fiqh and Islam. Nowhere in the Quran is it mandated that gay men can be rounded up, put in concentration camps and executed. Blaming Shari’a law also provides an excuse for those perpetrating such gross violations. No religion is to blame for the actions of the Chechen authorities. Their total disregard for life and liberty is to blame instead. We are going to have to agree to disagree on the importance of Shari’a law on this issue.

Rest assured that we will continue to work on the horrendous violations occurring in Chechnya and in other countries around the world. We will also continue our work against the death penalty, and other forms of capital punishment.

I am sorry that I cannot be of more help on this one.

Dear friend, I am sick to the pit of my stomach about the news out of Chechnya. Thank you for your ongoing efforts to raise awareness and pressurise the authorities. I am however disturbed by the skirting of what I believe to be crucial facts, namely that Chechnya is an Islamic Republic that has a legal system independent of Russia of which it is a nominal part and that their legal system is based on Sharia law. Surely this is not a peripheral fact when we consider that of the ten countries in the world where the death penalty exists for gays, all are Islamic. As a gay man and a recovering catholic I have no love for Christianity or any homophobic religion but the plight of LGBTQ+ in Islam is terrifying as I know from ex-Muslim gay people in the UK and from those on social media.

Why do we not at least acknowledge the truth?

Am I judged harshly for even raising the issue.

Subject: Re: [Message from Contact us] Torture and murder of LGBTQ in Chechnya

What makes this ‘region’ of Russia different from other regions of Russia? Why are gay people in St Petersburg, where LGBT rights are under constant threat, thankfully not being imprisoned and tortured to death? On the contrary, gay organisations in western Russia are trying to get gays out of Chechnya and to places like St Petersburg ad you of course know very well. It doesn’t take much research to find the big difference, the same reason why ten countries in the world have the death penalty for being gay. There’s no point in ignoring this truth is there?

Thanks for your message. In our research, this is not true. Chechnya is a region within the Russian Federation; as far as we know, they do not have a code based on Sharia Law.