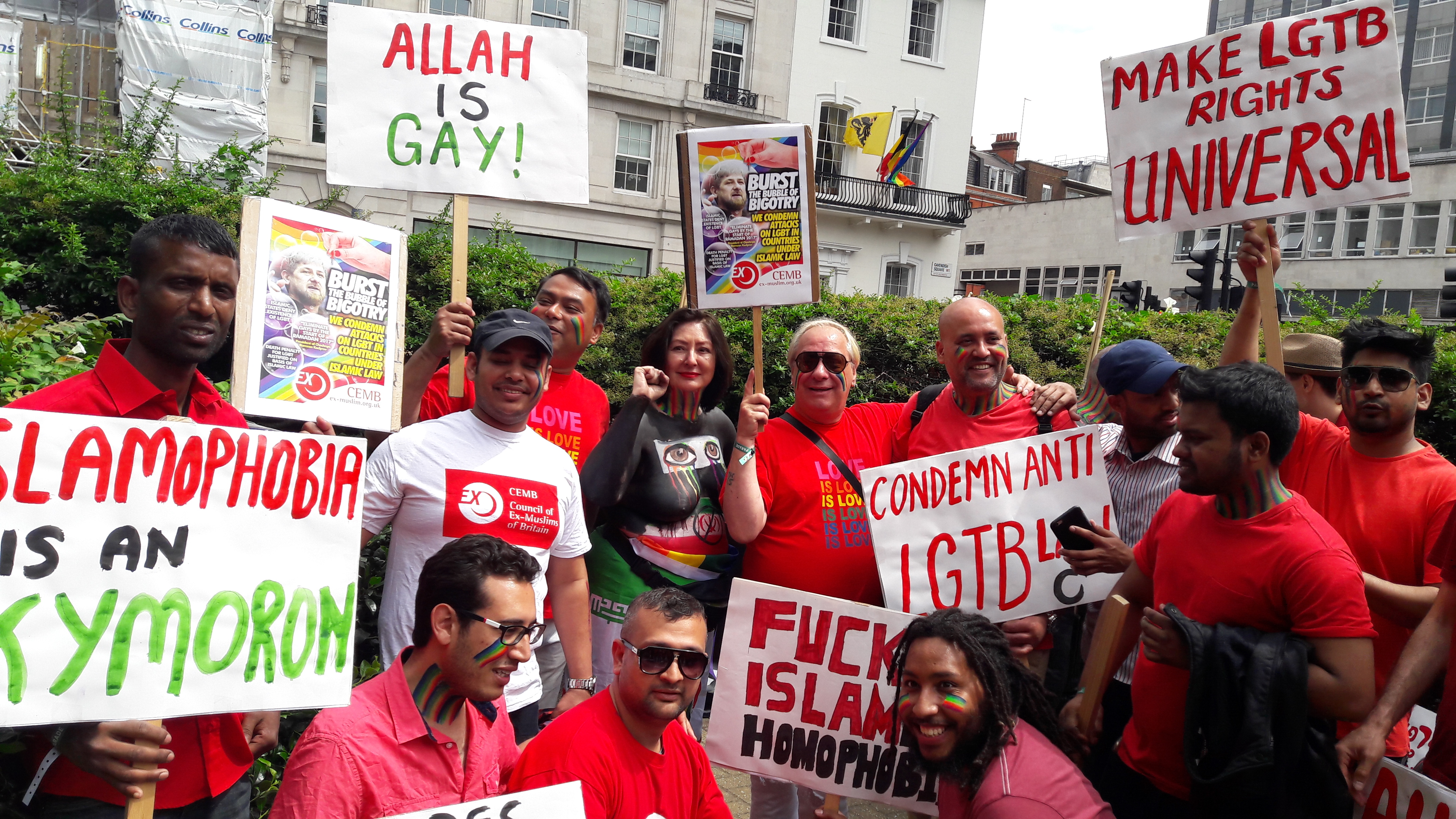 You made the first ever “Allah is Gay” placard for Pride 2017. Why?

I made “Allah is Gay” placards at Pride 2017 because I believe that LGBT people of Muslim heritage have to take the lead in tackling homophobia and hate in our respective Muslim communities and Muslim-majority countries. As an ex-Muslim bisexual man, I felt that “Allah is Gay” challenges both blasphemy/ apostasy laws as well as homophobic ones. There is also some truth to it. According to Islamic teachings, Allah has no gender and no partners. Allah is in fact, agender, non-binary and asexual!

The police tried to remove the placards at Pride 2017 but eventually backed down. What did you think of the police accusation that it was “offensive”?

The attempt to remove our “Allah is Gay” placards during Pride 2017 stems from the fact that Western societies frame our struggle from within their own perspective, like the BBC journalist who asked you if it was the right time for the #ExMuslimBecause hashtag as if only what happens in the west matters and we should only act accordingly. Anti-Muslim bigotry is a very valid issue; I myself have been a victim of anti-Muslim comments, however I think it is disgraceful for the police or anyone else to tell me, an ex-Muslim LGBT refugee, what I can and cannot say about the religion and the countries and the culture I grew up in. Also, I refuse to be lectured about racism and anti-Muslim bigotry from the London Pride team (who are not affected by these issues) or anyone else especially since I have been victim of both countless times.

Some will say that “Allah is Gay” was later used by the far-Right Lauren Southern. If so, what is difference between CEMB using it and the far-Right doing so?

Lauren Southern is a well-known racist. She flew all the way from where she lives to go to Luton town centre to distribute leaflets targeting the Muslim population specifically, claiming it was a social experiment. What I find interesting about her is that she only uses LGBT rights as a way to target people of Muslim heritage. She is far from a champion of LGBT rights and had no problem cooperating with notorious homophobes. She also took part in a failed attempt to disrupt migrant sea rescue missions. Many of those who drowned in the Mediterranean were LGBT as well. She wants the west to deport immigrants, many of whom are LGBT. She reminds me of the conservative MP Nadine Dorries who speaks of gay rights or feigns concern for the rights of Niqabi women (absurdly claiming that Muslim women wear it to cover bruises) whilst she voted 9 times against Gay equality legislation and for cuts that affected women’s centres and legal aid services.

What did you think of charges of Islamophobia by the East London Mosque and even some LGBT Muslims?

Again, I think disagreements are absolutely fine with me. But implying we are a far-right mouthpiece is denying us our agency and our opinions and leaves others to think that only Islamists and far-right racists are able to have political stances. The East London Mosque is notorious for enabling and validating homophobia and the homophobes amongst Muslims and sought to accuse us – people from Muslim backgrounds, LGBT  refugees and asylum seekers – of being anti-Muslim in order to shut down legitimate debate about their homophobic stance. Using accusations of Islamophobia and anti-Muslim bigotry to silence people from Muslim heritage who are challenging certain issues within their respective communities and Muslim-majority countries is an insult to all of us who have been victims of anti-Muslim bigotry. It plays into the hands of the far-right which complains that anti-racism has “gone too far” and that they’re unable to say anything anymore. Their claims are obviously as ridiculous as the accusations of ‘Islamophobia.’

What has Allah is Gay got to do with LGBT rights in countries under Islamic rule?

I personally have gone to Pride every year since I came to this country solely to highlight the plight of dissenters in Muslim-majority countries where freedom is being eroded with the rise of human rights violations and attacks on fundamental human rights such as freedom of expression. The pictures of our protest went viral showing that it is possible to celebrate apostasy and homosexuality and at the same time stand up to racism and bigotry. As long as the only places where homosexuality as well as apostasy and blasphemy are punishable by death are Muslim-majority territories, we will attend Pride events and highlight the  plight of millions who are being denied their fundamental human rights.

How does it make you feel to see an ex-Muslim in Germany wearing an Allah is Gay T-Shirt. He needed police protection but it is becoming normalised. There was also Allah is Gay placards in Canada this year.

I think it is great that the message is spreading. We need these slogans to become associated with those of us who really care about LGBT rights and human rights. We are not doing it as stunts to score political points or gain publicity. CEMB works all year-round on these issues and we have a real stake in these issues, as we are, have been and will be affected by it.