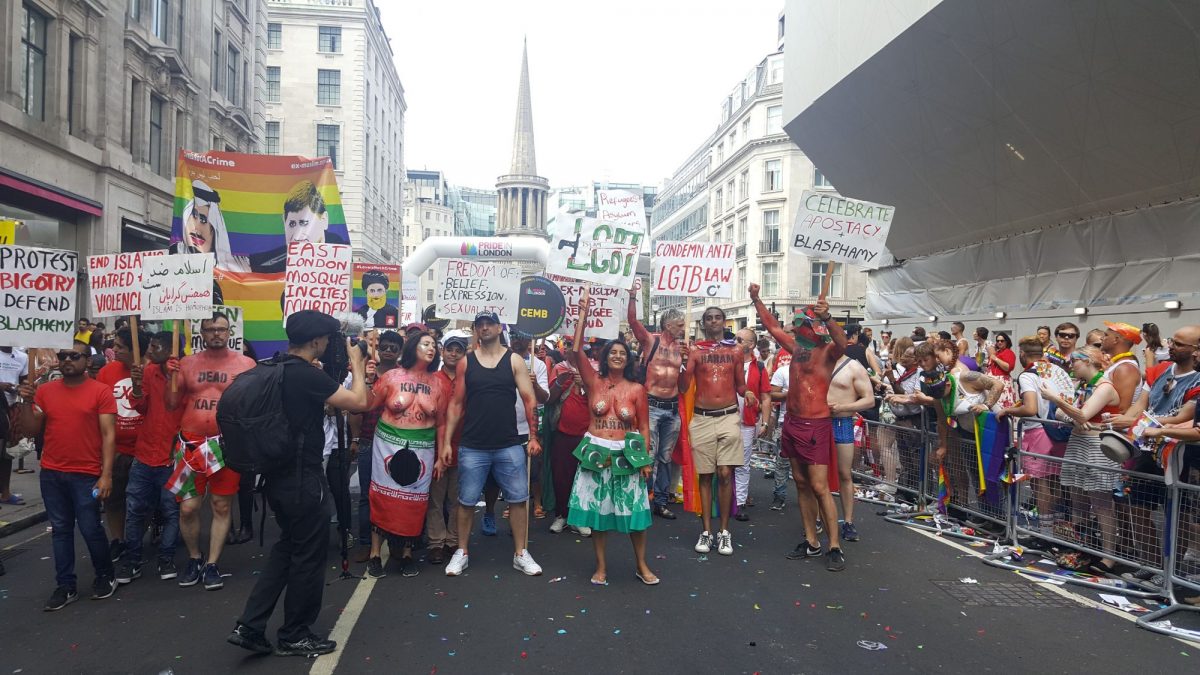 By Jimmy Bangash
This was published in Conatus News on 5 July 2018.

Pride is an important, welcoming place for LGBT people of Muslim heritage, including liberal Muslims and ex-Muslims.

Amrou Al-Kadhi’s article in The Guardian paints a bleak picture of London Pride. It contains inaccurate citations of placards and, more menacingly, erases the bastion of hope and progress that the parade symbolises for many LGBT people of Muslim heritage.

Life for LGBT people of Muslim heritage can be bleak. For many it involves living a closeted existence within the Muslim ‘community’ for fear of being ostracised or disowned. Religious institutions and theological teachings espoused by ‘community’ leaders range from preaching for our execution, through to advising us to live a life of celibacy. The wider Muslim ‘community’ follows this homophobic trend. With 52% of polled British Muslims stating that homosexuality should be illegal and 47% stating that it is unacceptable for a gay person to become a teacher, it is clear that our ‘community’ is the most homophobic within the UK.

Homosexuality in Muslim ‘communities’ is inextricably linked to fear, violence, and death. For those of us who spend more time in the LGBT community, this can be something we forget. It is irresponsible to do so.

Pride provides a safe place to challenge this religious homophobia. Since its inception, Pride has been a place where LGBT people are able to rally against political, cultural, and religious condemnation of homosexuality. Whilst Pride in the 21st Century has a far stronger corporate message than ever before, the ability for religious and secular groups to march still remains. Last year’s March contained LGBT Pagans, LGBT Christians, and LGBT of Muslim heritage to name a few. Indeed, LGBT of Muslim heritage were represented across several groups in the parade; Naz and Matt Foundation, Council of ExMuslims of Britain, Imaan, and Hidayah. Imaan were awarded best walking group, a notable achievement due to the small size of their group in comparison to some of the larger groups.

Whether it is gay ExMuslims (GEMs) protesting with placards stating “F**K Islamic Homophobia” and condemning the Islamic States that have the death penalty for homosexuality, or Gay Muslims attempting to redefine the position of gays within Islam with placards of “Allah Love us All”, Pride currently provides the only safe place to galvanise public awareness to the diverse protests and messages of LGBT of Muslim heritage. A safety which is not afforded to us, on any level, by the wider Muslim ‘communities’.

Condemnation of Pride for the low funding of LGBT of Muslim heritage groups is misplaced. Rather, the Muslim ‘community’ must be held to account for its utter hostility and neglect of its LGBT members, and for not allocating any financial resources to them. Additionally, rather than bemoan the presence of the press at Pride, we would benefit from utilising the press to place Islamic homophobia under scrutiny. It is important that responsibility for religious homophobia is highlighted where it resides. Scapegoating Pride and the press for the homophobia that is endemic in our ‘community’ will not progress our fight for equality for LGBT people. Redefining LGBT equality in non-Muslim ‘communities’ as privilege is pernicious when, more accurately, we should be defining the need to remain closeted as oppression.

Redefining LGBT equality in non-Muslim ‘communities’ as privilege is pernicious when, more accurately, we should be defining the need to remain closeted as oppression.

Such diversity of thought and protest may only exist within a secular environment. Rather than excluding anyone, the secular space afforded by Pride fosters a space of inclusion where groups can protest with aligning or contrasting messages. It allows for placards championing witty religious acceptance; “Jesus had two dads”, and those condemning institutions such as the East London Mosque that have such a history history of hosting homophobic speakers that Oxfam refused to work with them.

This same secular space allows for Muslims to abstain from alcohol consumption whilst allowing those who choose to drink to do so. Banning alcohol from Pride because it affects the sensibilities of Gays of Muslim heritage rather perversely borders on an Islamist agenda by seeking to dominate the freedom of others. For those gay Muslims who are fasting one wonders why they would feel the need to attend a Pride event if they found it difficult to be around alcohol, since dancing, music, and homosexuality are defined as equally haram and sinful.

Banning alcohol from Pride because it affects the sensibilities of Gays of Muslim heritage rather perversely borders on an Islamist agenda by seeking to dominate the freedom of others.

Whilst condemnation of corporations comes easily to the lips of activists, it is important to recognise the significant traction that has been made in this arena with regards to rights of LGBT people. Not long ago LGBT employees were busy trying to hide their sexuality from colleagues (some still do) for fear of bullying, persecution, and being fired by their employer. Now, companies sponsor gay Pride highlighting their solidarity with the LGBT community. Employers recognise not only that LGBT people are consumers but also that employees who are able to be themselves at work are far more productive. Whilst aligning to the basics of the 2010 Equality Act, many go further, developing equality and inclusion policies stating that homophobia will not be tolerated within their organisation.

The corporate glare may be blinding to those of us seeking a more political message. Nonetheless, we must recognise that the banners for Wagamama and Barclays are frequently flown by the LGBT employees of these companies.

They, like the gays of Muslim heritage, are reclaiming their right to be unapologetically out, loud, and proud in public.