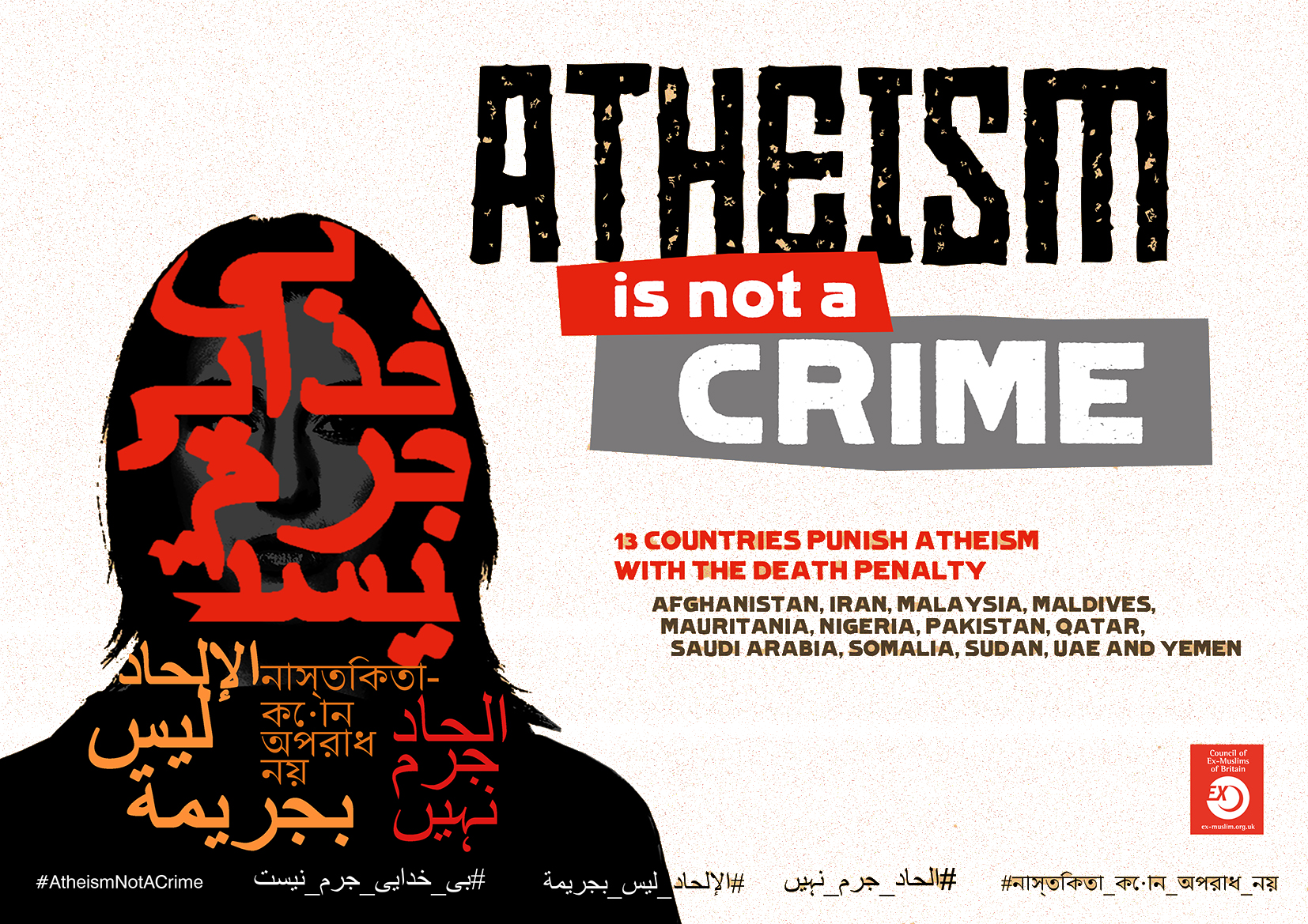 Join our campaign stating loud and clear that freethought is not a crime!

Islamic states consider atheism a “threat” – seeing it as an existential danger, especially since Islam and state power are intertwined, hence why atheists are persecuted (with many others including religious minorities, women’s rights activists, labour leaders and LGBT).

• Iran as one of the most important bases of atheism in the Middle East, with more than half the population using the Internet regularly, has seen a government ban on more than 160,000 social media accounts and websites for  spreading “atheism and corruption” in one year alone.

• Two government ministries in Egypt have been ordered to produce a national plan to “confront and eliminate” atheism. The Egyptian parliament is looking to criminalise atheism.  Recently, Mohammed Hashem was told to see a psychiatrist and kicked off a television show for not believing in God. A mother has even lost custody of her children because she is an atheist.

• A series of laws in Saudi Arabia define terrorism as “calling for atheist thought in any form, or calling into question the fundamentals of the Islamic religion.”

• A Malaysian government minister has said that atheists should be “hunted down” and “re-educated.”

• In Pakistan, a High Court Judge has reiterated that “blasphemers are terrorists” in a case that seeks to ban “derogatory” social media posts against Islam and Muhammad, Islam’s prophet. The Islamabad High Court has directed the government to block web pages containing blasphemous content and put the names of “blasphemers” on the exit control list.

And even in countries without the death penalty, like Bangladesh, Islamists kill atheists whilst the government does little or like Tunisia, where Hatem Al Imam, the President of Tunisian Freethinkers has been brutally attacked. Turkish government-backed Islamists in Afrin address “Kurdish atheists,”telling them to repent or face decapitation …

Clearly, to be an atheist, to question or criticise God, prophets, Islam and any religion or dogma is not a crime though too many are being killed or imprisoned for it. It is high time to stop blaming atheists for their persecution under cover of offence, Islamophobia, hurt sentiments… and instead target the states and movements that are hunting down, imprisoning and murdering people for the mere exercise of their freedom of expression and conscience.

Urgent cases that need our immediate attention include:

Bangladesh: Asad Noor, a 25-year-old atheist blogger is facing up to 14 years in prison because he “hurt religious feelings” with his social media posts “mocking the prophet”.

Iraq: In Dhi Qar- Al-Nasiriya, a city in the southern part of  Iraq, atheists have been hunted down; in most recent news, one of four has been arrested for “spreading the culture of the absence of God.”

Pakistan: Ayaz Nizami and Rana Noman face the death penalty for “blasphemy.” After the arrest, #HangAyazNizami trended on Twitter. Taimoor Raza, 30, has also been sentenced to death for “insulting the prophet Muhammad.”