#I AM VIDA – Protesting against World Hijab Day 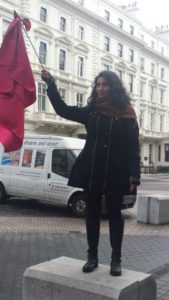 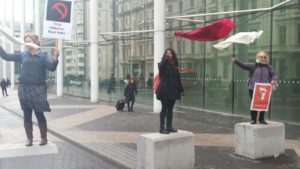 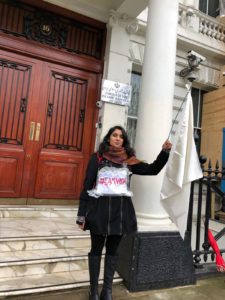 The Council of Ex Muslims of Britain (CEMB) was protesting against World Hijab Day outside the Iranian embassy on the Wednesday 31st January 2018.

World hijab Day takes place every year on the 1st February and countless non-Muslim women don the hijab, without knowing or caring what is stands for. However, during the current protests in Iran, countless brave and fearless women in Iran are tearing off this symbol of oppression and there has been complete silence from western feminists.

Vida Movahed has become the iconic image of the current movement, in revolt of the mandatory hijab laws of Iran, she removed her veil and was stood with it on a stick, inspiring other women and later some men to also photographing themselves with their hijabs on sticks.

CEMB’s protest was originally organised to coincide with Masih Alinejad’s White Wednesday campaign, ahead of World hijab Day, however, with the current situation in Iran, CEMB also felt it important to stand in solidarity with women like Vida. So on the 31st January 2018, CEMB created the # I AM VIDA campaign. We are asking everyone to photograph themselves as Vida did, to show the women of Iran, they are not alone, we hear them and we stand in solidarity with them. We will not back down, we will lobby your government to stop oppressive mandatory hijab laws.