Written by Sadia Hameed on February 14, 2018. Posted in Press Releases. 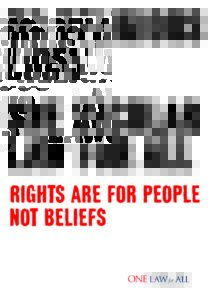 As black and minority women and human rights campaigners, we voice our dismay at the outcome of the inde pendent review on Sharia laws commissioned by the government in 2016. Although the government has rejected formal recognition (through regulation), the way has been left open for the Sharia courts to continue to exist in a no-man’s land where they continue to produce discriminatory parallel laws while posing as an acceptable alternative dispute mechanism. Now they will be strengthened by a review that has endorsed their existence.

At the outset, we feared a whitewash but what we have seen is worse. The review is superficial, narrow and secretive; and completely lacks credibility. We protested when the Home Office appointed a theologian to lead the review and two Imams as advisers. How absurd that the Home Office now claims that the review ‘was not tasked with considering theological issues, for example whether Islam and Sharia law treat women in an unequal way’. Why then appoint three people whose only qualification for the job was their status as religious scholars?

Any review that is based on interviewing only eight women and a handful of organisations; and that provoked a boycott from most of the organisations that deal with women adversely affected by religious laws, cannot be considered legitimate. Demands for the acceptance of Sharia laws to govern family matters are part of a wider fundamentalist and ultra conservative goal to normalise profoundly misogynist values in the law and other public spaces. Our front-line experience has found clear evidence that both the intent and the process of the Sharia courts is abusive and discriminatory; that the Sharia bodies are run by organisations with links to extremist organisations; and promote the full range of fundamentalist goals such as strict gender segregation, imposition of hijabs and other dress codes, homophobia, bigotry and discrimination against non-Muslims and Muslim dissenters, blasphemy laws and attacks on apostates.

Our research also shows that they do refer to ‘courts’ and ‘Judges’, because of a clear intention of establishing themselves as a parallel law which ‘good Muslims’ must adhere to. The review suggests that that they are ‘Councils’ only and thus sanitises them.

In order to arrive at its conclusions, the reviewers conducted no investigation and ignored evidence that would have undermined their conclusions. They ignored the wider political fundamentalist drive to undermine human rights. They also ignored a considerable body of evidence submitted to the Home Affairs Select Committee in Parliament by members of our coalition and others. For instance, Maryam Namazie submitted two statements in evidence which contained details of statements made by Islamic law ‘Judges’, that exposed their wider political agenda. Knowing that hate speech and discriminatory speech is regularly erased from websites once it has been exposed, she had taken screenshots of their statements. She stated in conclusion, ‘despite all efforts to package Sharia’s civil code as mundane, its imposition represents a concerted attempt by Islamists to gain further influence in Britain’. If the reviewers did not wish to draw on our submissions, they could have applied some diligence and researched it themselves. Why did they not do so?

The coalition also gathered detailed testimony from many women. Unlike the reviewers, we did not ask for evidence solely from women who had experience of sharia courts, although we met and interviewed many who had tried to get a divorce under ‘sharia law’, were deeply traumatised by the experience and experienced further violence and abuse of their rights. We also published and put in evidence to parliament, a devastating letter signed by over 300 abused and marginalised women from all religious backgrounds expressing their fear of being controlled by religious laws.

Sweeping statements are made about the “choice” that Muslim women make to approach such councils without giving any consideration to the highly constrained religious context in which that “choice” is made. The review is utterly silent on the crucial concept of ‘zina’ (sex outside marriage), the grave sin punishable by death in many Muslim countries. It is fear of ‘zina’ which compels many women, even those with civil divorces to seek an Islamic divorce. Procedural changes in sharia councils will not diminish their role in spreading this concept; to which they provide the only ‘solution’. That is why use of Sharia bodies is increasing. Evidence before the Home Affairs Select Committee makes clear that fundamentalists insist that a civil divorce cannot be final. Yet earlier generations of women had civil marriage (as well as a Muslim marriage contract) and were satisfied with a civil divorce. Increased religious bullying is a major reason for women’s recourse to sharia, not simply their ‘conscience’. Indeed, the form of Sharia which the theologians of the panel have failed to challenge is much more regressive than Muslim personal laws in Muslim majority countries.

Unlike the review, we have shown that women cannot engage with Sharia Councils or the Muslim Arbitration Tribunal in relation to their divorce without this also impacting on their rights and freedoms in other areas. Our research shows that Sharia Courts/ Councils deal with more than divorce – they impose ‘mediation’, promote polygamy and child marriage, and interfere with child custody and criminal proceedings in relation to domestic violence. The review made no serious attempt to investigate these issues.

The review stands in direct contrast to the devastating observations made by Dame Louise Casey in her report in 2016 “women in some communities are facing a double onslaught of gender inequality, combined with religious, cultural and social barriers preventing them from accessing even their basic rights as British residents.”

A forensic examination of the operation of Sharia in Britain lays bare what fundamentalists do to achieve their goals, not merely what they think. We do not accuse them simply of ‘thought crimes’ but of promoting crimes and human rights violations.

The review is a botched attempt at consultation established with flawed terms of reference and an explicit disregard for gender discrimination. The government and the reviewers have failed the women most affected and ignored the concerns of rights advocates.

We will be providing a more detailed submission. Meanwhile, we call on you, as Home Secretary, to ensure that none of the recommendations contained in the review are implemented without consultation with those advocates who are able to make clear connections with extremism, fundamentalism and inequality. The government has, so far, failed in its duty to make an equality impact assessment, which it needs to do with the full weight of evidence before it. Continued indifference to the government’s duty to respect, protect and fulfil human rights will leave us in no doubt that there is no change to the social contract in which women’s rights are traded off as part of a process of appeasement of fundamentalists and extremists.

We look forward to your response.

Written by Sadia Hameed on February 13, 2018. Posted in Media Coverage. Written by CEMB on February 9, 2018. Posted in Media Coverage.

Written by CEMB on February 8, 2018. Posted in Media Coverage.