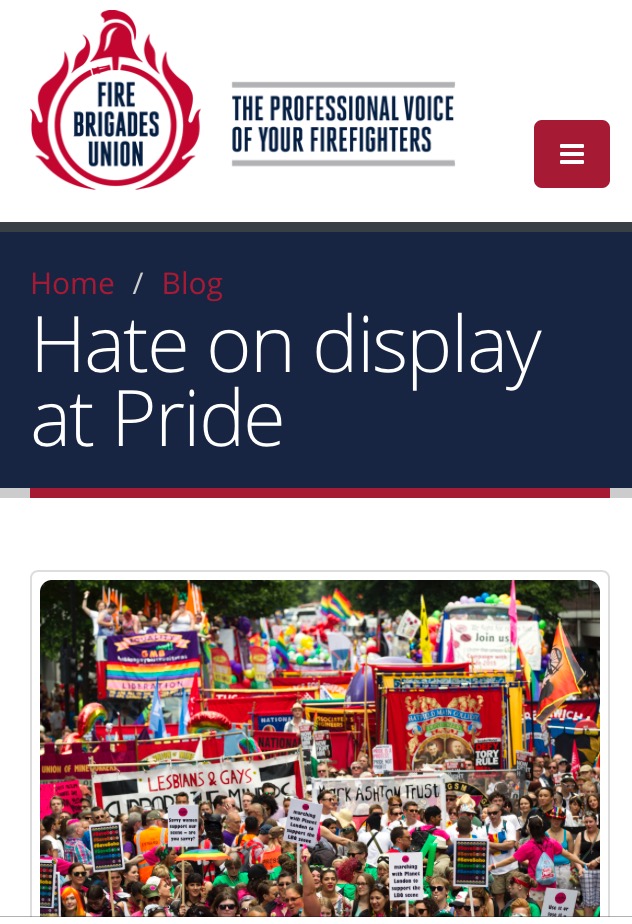 FBU: We are combating hate not promoting it

By CEMB July 12, 2017 7 mins read
Share
Lucy Masoud, treasurer of the Fire Brigades Union in London, has written a blog on The FBU website saying the Council of Ex-Muslims of Britain (CEMB)‘s presence at Pride was “hate on display” and that the group is “Islamophobic” and “carried offensive signs such as ‘F**K Islam’ and ‘East London Mosque Incites Murder of Homosexuals’”. She added that members were “offended” by CEMB, that CEMB was “sinister” and that when she confronted our group, “they admitted they had never been Muslim”. Masoud added: “Pride is meant to be about acceptance and love, not hate. Most LGBT people have experienced hate and prejudice towards them at some point, so any group that has nothing to say but hate, has no place at Pride.”
The Council of Ex-Muslims of Britain, established nearly ten years ago, defends the right to conscience and expression, which are meaningless without the right to reject and criticise religion. Given that apostasy, blasphemy and homosexuality are punishable by death in countries under Islamic rule (countries, by the way, from which many of the refugees in our group have fled from), these rights are a matter of life and death for many of us. Which is why it was a very proud moment for us to be out, loud and proud at Pride.
As anyone going to Pride knows, signs with “God is Gay” or “Jesus has two fathers” is evident every year as are signs critical of Christianity and the Christian-Right. Our signs are no different. All our signs were critical of the homophobia in Islam and the hate perpetrated by the Islamist movement against not just ex-Muslims but Muslims and others too. We also had signs against racism, including “Protest Bigotry, Defend Blasphemy”, “Homophobes, Islamists, Racists, Fuck Off”, and “CEMB, LGBT, Refugee and Proud”. (See here.)
That Ms Masoud takes our presence personally as an attack on her says more about her politics than ours – a politics that feeds into the Islamist narrative, that normalises blasphemy and apostasy laws, that demands silence from critics of Islam and that gives the green light for Islamists to continue to murder us using the excuse of “offence”.
Wittingly or unwittingly, charges of “Islamophobia” conflate criticism of Islam with bigotry and hate against people. In fact, we are merely countering the hate against ex-Muslims and LGBT by Islamic states and movements.
Ms Masoud: Criticising mosques that call for our death, criticising Islamic states that murder us and our loved ones, criticising Islam, like criticism of any religion or belief, is not hate but combating hate against real live human beings. If “progressives” like you were more concerned with murder than offence, what a different world this would be.
Until we are allowed to think, live and love as we choose without the imposition of religion via the state, the law, the “community”, or via any always offended sensitive soul like yourself, we will continue to shout our blasphemy from every rooftop.
One question to the FBU: Labelling a minority within a minority who face threats and intimidation on a daily basis as a hate group places us at further risk and is victim blaming at its finest. Is this the official FBU position and if so, we will be taking this matter further.
FBUhatePride
0 comments 304 views