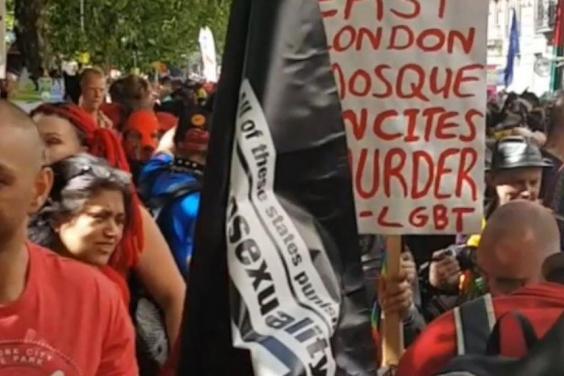 The Council of Ex-Muslims of Britain (CEMB) represents former Muslims who are from Muslim-majority countries or diaspora communities. Frequently, these are refugees seeking asylum as they are being persecuted for leaving Islam or for being LGBT. We are committed to calling out oppressive narratives, racism and anti-Muslim hate and homophobia – all of which directly impact our members.

Ironically, CEMB’s presence at Pride in London has been labelled ‘Islamophobic’ by the East London Mosque (ELM), a word we reject as a disingenuous misnomer and which conflates criticism of a set of beliefs (Islam) or the religious-Right (Islamism) with bigotry against a group of people (Muslims). This word is used by religious fundamentalists to silence criticism of Islamic doctrine – even if that doctrine explicitly calls for the death of apostates and homosexuals. Juxtapose it with ‘Christianityphobia’ or ‘Hinduismphobia’ – words which are never used despite ample criticism of both ideologies.

CEMB maintains that its placard accusing the ELM of inciting murder against LGBT was entirely appropriate given that the theme of CEMB’s Pride march was solidarity with LGBT in Chechnya, with an alarming resurgence of concentration camps for gay men, as well as those persecuted and facing execution in 14 states under Sharia (15 if you count ISIS-held territories). The ELM has hosted a number of speakers who have publicly called for the persecution of homosexuals and apostates and has even been criticised for this in the past by activists such as Peter Tatchell and organisations such as Oxfam. Unbelievably ELM hosted a speaker’s presentation which contained slides titled “Spot the Fag” and hosted Yasir Qadhi who stated on homosexuals “…I know that his punishment is death. This is all a part of our religion. This doesn’t mean we go and do this in America but I’m saying if we had an Islamic state we would do this.”

CEMB maintains that the ELM’s hosting of Islamic preachers that promote the persecution and murder of homosexuals is incitement to harm and murder of LGBT individuals. Furthermore, we highlight the absurdity of ELM’s victim narrative accusing us of incitement against ELM, when in fact we are exposing their incitement to violence against LGBT ex-Muslims and Muslims.

The MCB says our banner “’East London Mosque incites murder of LGBT’ is utterly fictitious and is tantamount to inciting hatred against this religious institution” which apparently “has a track record in speaking out against homophobia”. If this is the case, we look forward to receiving public statements from ELM and MCB, which rejects the execution of gays and apostates under Sharia law in any country, including in an ideal Islamic caliphate.

Jimmy Bangash
On Behalf of Council of Ex-Muslims of Britain