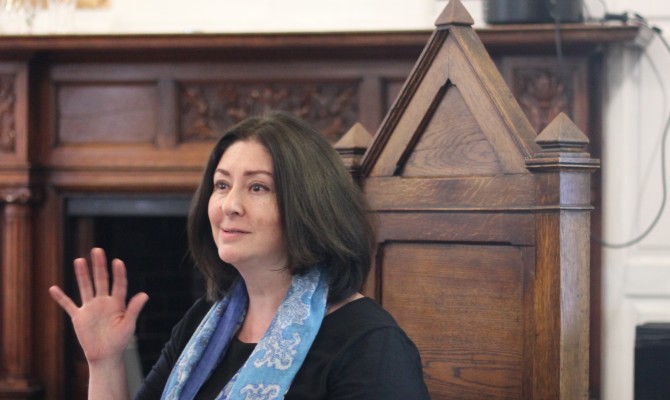 CANCELLED BY ORGANISERS – Apostasy and the Rise of Islamism, Trinity College Dublin

Maryam Namazie will be speaking on Apostasy and the Rise of Islamism at Trinity College Dublin on 23 March 2015. More information here.

I will not accept Trinity College Dublin conditions on my talk

Also see “I was not born yesterday”.

I am to speak at Trinity College Dublin on Monday 23 March 2015 on “Apostasy and the Rise of Islamism”.

I’ve just been informed, however, that college security (why security?) has claimed that the event would show the college is “one-sided” and would be “antagonising” to “Muslim students”; they threatened to cancel my talk. After further consultation with college management, they have decided to “allow” the event to go ahead with the following conditions:

* All attendants of the event must be 1) Trinity students and 2) members of the society hosting the talk.

* For “balance”, they require that a moderator host the event; Prof. Andrew Pierce of the Irish School of Ecumenics has kindly agreed to do so.

I, however, will not be submitting to any conditions, particularly since such conditions are not usually placed on other speakers.

I intend to speak on Monday as initially planned without any restrictions and conditions and ask that TCD give me immediate assurances that I will be able to do so.

It is crucial that I be able to speak against Islamist fascism and honour our dissenters deemed apostates, blasphemers, heretics… whether ex-Muslims, Muslims or non-Muslims.

I particularly insist on being able to do so in light of the fact that only last month – 25 February – Kamal El Mekki who advocates the death penalty for apostasy was given space to speak at an event hosted by the “Muslim” Student Association. No conditions were placed on his talk and security did not threaten to cancel the event nor inform the Association that the speakers’ position on death for  apostates would “antagonise” ex-Muslim and Muslim students who do not support apostasy laws.

Interestingly, when the college’s Central Societies Committee was informed of El Mekki’s view on apostasy, they could not “see why there can even be a discussion about cancelling the event” and that his video was simply “explanatory and not advocatory”!

The video they were alerted to shows El Mekki advising his audience on how best to explain the death penalty for apostates. He tells them to start with the simplest example so that the need for the death penalty can be easily understood. In the video, he says:

…in Islam, of course, you know, it’s a very different system. It’s not like somewhere you heard someone leaves Islam and you just go get him and stuff like that. First of all it’s done by the authorities, there are procedures and steps involved. First of all they talk to him, yeah, about, yanni, the scholars refute any doubt that he has on the issue, they spend days with him refuting and arguing with him, trying to convince him. Then they might even, yaani, threaten him with the sword and tell him ‘You need to repent from this because if you don’t you repent you will be killed.’ And if he insists on being killed that means really, really believing in that. And then, after the procedures take their toll, and then at the end, by the authority of the ruling body, it’s done.

This is beyond outrageous given the social and political reality where apostasy from Islam is punishable by death in 11 countries and especially at a time when it has come to light that British Islamists are executing apostates for ISIS after having been “radicalised” in British universities. Also it does a disservice to the many Muslims who oppose Islamism and apostasy laws by conflating “Muslim” students with Islamism or the religious-Right.

Trinity College Dublin, I am awaiting your response.

For those who want more information on this “beautiful young man”, see here – oh sorry that was Jihadi John who was beautiful according to Cage.