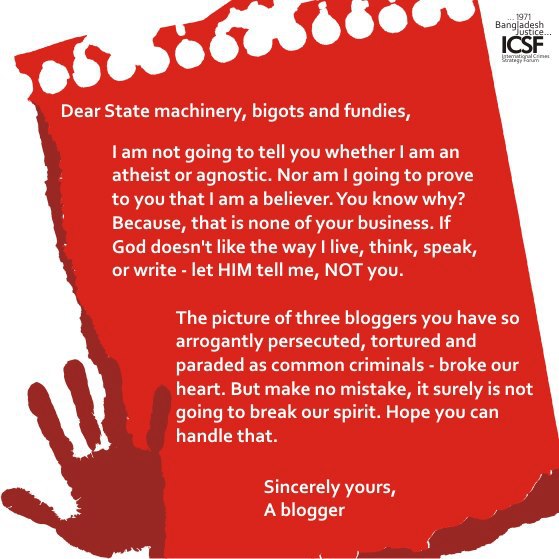 After the Charlie Hebdo Massacre, Support those Fighting the Religious-Right

After the massacre in Charlie Hebdo in Paris on January 7, 2015, expressing indignation, as so many are doing, is not enough.

A quick look at the English-speaking media shows that whilst many condemn the violence itself, they also assert that Charlie Hebdo courted (and maybe deserved?) a strong response from “Muslims”. Charlie’s regular cartoonists did not spare Islam, any other religion, nor fanatics and bigots.

This trend in the media requires our attention. Apparently secularists, agnostics and atheists must keep silent and do not deserve the kind of respect that believers are entitled to; nor can they enjoy free speech to the same degree.

In the name of “respect” of religions and of the religious sentiments of believers, it is indeed the fanatical religious-Right that is being supported and given centre stage. Meanwhile, those who are on the forefront of countering armed fundamentalists are left to their own devices. It is high time to give these secularists prominence, to recognise their courage and their political clarity and to stop labelling them “Islamophobic”.

In October 2014, secularists – including atheists, agnostics and believers from many countries, in particular many Muslim-majority countries, met in London to denounce the religious-Right and to demand being seen as its alternative. It is high time to learn from their analysis and lived experiences.

The tragic massacre in Paris will undoubtedly give fuel to the traditional xenophobic far-Right and the immediate danger is an increase in racism, marginalization and exclusion of people of Muslim descent in Europe and further.  We do not want to witness “anti-Muslim witch hunts” nor do we welcome the promotion of “moderate” Islamists by governments as official political partners. What is needed is a straightforward analysis of the political nature of armed Islamists: they are an extreme-Right political force, working under the guise of religion and they aim at political power. They should be combated by political means and mass mobilisation, not by giving extra privileges to any religion.

Their persistent demand for the extension of blasphemy laws around the world is a real danger for all. France has a long – and now growingly endangered – tradition of secularism; which allows dissent from religions and the right to express this dissent. It has had a rich tradition to mock and caricature powers that be – religious or otherwise. Let us keep this hard won right which cost so many lives in history, and, alas, still does – as Charlie Hebdo’s twelve dead and numerous wounded demonstrate.