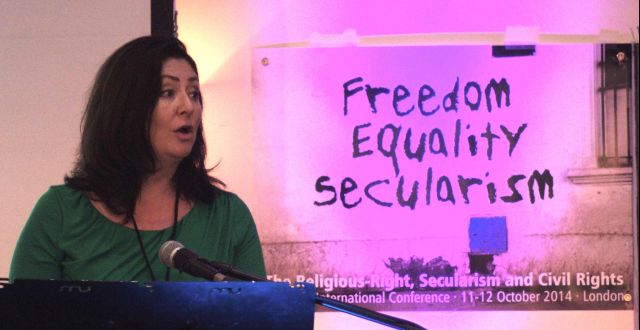 The two-day International Conference on the Religious Right, Secularism and Civil Rights held in London during 11-12 October 2014 was a rousing success.

A broad coalition of secularists, including believers, free-thinkers, agnostics and atheists assembled from the Middle East, North Africa, South Asia and the Diaspora at the unprecedented and historic gathering to discuss resistance against the repression and violence of ISIS and other manifestations of the religious-Right, including in Afghanistan, Algeria, Bangladesh, India, Iran, Israel, Libya, Pakistan, Sri Lanka, Sudan, Turkey, Tunisia and Yemen. They also discussed the urgent need to defend secularism, universal values and citizenship rights.

The 250 delegates made an unequivocal stand with the brave women and men of Kobane saying: “Their struggle is ours. Their fight is a fight for us all. We are all, today, Kobane.”

The conference, which was convened by Algerian sociologist Marieme Helie Lucas and Iranian-born Campaigner Maryam Namazie, adopted a Manifesto for Secularism which criticised neo-conservatism, neo-liberalism, communalism and cultural relativism and affirmed the complete separation of religion from the state and public policy, freedom of religion and atheism and freedom to criticise religions as well as equality between women and men and citizenship rights for all. It also called for the abolition of religious laws in the family, civil and criminal codes and an end to discrimination against and persecution of LGBT, religious minorities, women, freethinkers, ex-Muslims, and others.

The conference highlighted the voices of the many persecuted and exiled, the long standing resistance against the religious-Right and the depth and strength of the demand for secularism all over the world despite grave risks. It also set the stage for the development of a broad international front for secularism to challenge the religious-Right, racism and all forms of bigotry.

The Conference called on people everywhere to join the International Front for Secularism and strengthen a human alternative to the religious-Right.

The Indonesian band SIMPONI was announced winner of One Law for All’s Sounds of Freedom award with their entry “Sister in Danger”, a tribute to Indonesian victims of sexual violence.

1. Videos of the Conference will be posted on the Bread and Roses TV Youtube Channel shortly.

2. Photos of the Conference will be made available soon.

3. Press coverage on the conference includes:

Secular conference created a sense of imminent and momentous change – and women will be the driving force, Terry Sanderson, NSS Blog, 15 October 2014

We are all Kobane: Rallying Cry of Resistants against Fundamentalism, Caroline Fourest, Huffington Post, 14 October 2014

Secular conference to discuss rise of religious-Right, The Guardian, 9 October 2014

Event on Rise of Religious Extremism to be Hosted in London, Prensa Latina, 9 October 2014