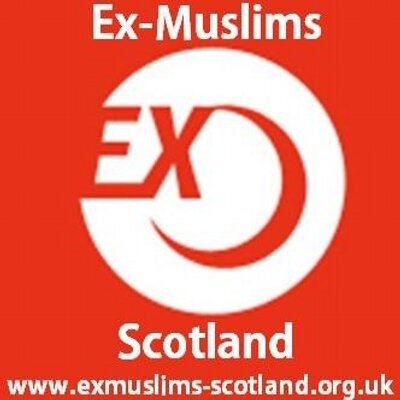 Ex-Muslims of Scotland has been formed

We are non-believers, atheists and ex-Muslims of Scotland, were born as Muslims and being Muslim was decided for us even before our birth. As free human beings with power of intelligence and decision, we have decided to leave Islam.

As Islam does not permit us to leave it and Islamic law recognises apostasy as a crime punishable by death, we, ex Muslims living In Scotland aim to celebrate our right of freedom of speech and conscience and announce our apostasy as a public challenge. We also strive to represent numerous ex-Muslims who live in countries under Islamic law and are not able to announce their apostasy because doing so may mean execution and imprisonment.

In countries under Islamic law every matter of citizen’s life is regulated by religion. In countries like Iran, women are severely restricted by Islamic law and compulsory hijab, Children are legally abused, Education is mixed with religious teachings; academics are controlled by religious bodies, humans are being executed in the name of God, citizens can not criticise the governing body as doing so is considered as act against God and Islam, atheists and converts are punished with the death penalty, sexual behaviours marked as un-Islamic like adultery and homosexuality are punished by stoning and hanging.

Universal rights and equal citizenship for all. We are opposed to cultural relativism and the tolerance of inhuman beliefs, discrimination and abuse in the name of respecting religion or culture.
Freedom to criticise religion. Prohibition of restrictions on unconditional freedom of criticism and expression using so-called religious ‘sanctities’.
Freedom of religion and atheism.
Separation of religion from the state and legal and educational system.
Prohibition of religious customs, rules, ceremonies or activities that are incompatible with or infringe people’s rights and freedoms.
Abolition of all restrictive and repressive cultural and religious customs which hinder and contradict woman’s independence, free will and equality. Prohibition of segregation of sexes.
Prohibition of interference by any authority, family members or relatives, or official authorities in the private lives of women and men and their personal, emotional and sexual relationships and sexuality.
Protection of children from manipulation and abuse by religion and religious institutions.
Prohibition of any kind of financial, material or moral support by the state or state institutions to religion and religious activities and institutions.
Prohibition of all forms of religious intimidation and threats.