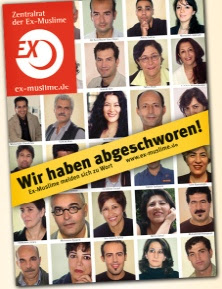 Below is a good summary of the impact and effect of the Council of Ex-Muslims of Britain. It’s an excerpt from “A South-North Transfer of Political Competence: Women of migrant Muslim descent champion secularism in France” by Marieme Hélie-Lucas published July 2011, Women Living Under Muslim Laws Dossier 30-31: The struggle for secularism in Europe and North America. To read the full essay, visit here.

…But it is only after the ‘Danish cartoons controversy’, with the setting up of the radical gender-mixed organization in Germany, the Council of Ex-Muslims 88 on 28 February 2007 in Berlin, that the term will become popular. Within months, in June of the same year, a Council of ex-Muslims emerged in the UK. The organization is expanding to other parts of Europe: it is presently in the making in France. Although the French Council of ex-Muslims is not yet formalized, it inherits and benefits from its predecessors’ groundbreaking epistemological work.

If one thinks for one minute that apostasy deserves the death penalty in the eyes of fundamentalists, one can evaluate the risks these people are taking, for the sake of clarifying concepts and standing for their right not to have a faith label imposed on them on the ground of origins. Not only does it breach the taboo of apostasy in Islam, but paradoxically, by its very name, it forces European people not to brand them ‘Muslims’.

It is certainly not by accident that both the Councils of ex-Muslims in Germany and in the UK are led by women, both of Iranian descent. Both received death threats after setting up the organizations.

Mina Ahadi, the founder of the Council in Germany, says that she wants to “highlight the difficulty of renouncing the Islamic faith”; she wants the Council to “help women renounce the Islamic faith if they feel oppressed by its laws”. Like the Secular Muslims of France before her, she points at the need to “form a counter weight to Muslim organizations that do not adequately represent Germany’s secular minded ‘Muslim’ immigrants’”. In an interview conducted on the eve of the launching of the Council of ex-Muslims, on 27 February 2007, she clearly points at the responsibility of German authorities:

“The associations pretend they represent everyone and to some extent are acknowledged as such by the German side… I am critical of Islam in Germany and of the way the German government deals with the issue of Islam. Many Muslim organizations, like the Central Council of Muslims in Germany (ZMD) or Milli Görüs, engage in politics or interfere in people’s everyday lives… Their aims are hostile to women and to people in general… They want to force women to wear the headscarf, they promote a climate in which girls are not allowed to have boyfriends or go to discos and in which homosexuality is demonized”.

In their manifesto entitled ‘Together facing the new totalitarianism’, the ex-Muslims state that they do not desire to be represented by regressive Islamic organizations and “Muslim community leaders”; they demand freedom to criticize religion, separation of religion from the state and “protection of children from manipulation and abuse by religious institutions”.

Maryam Namazie, founder of the Council of ex-Muslims in Britain, said on BBC News on 21 June 2007 that “we are quite certain we represent a majority in Europe and a vast secular and humanist protest movement in countries like Iran.” The new organization would be a branch of a growing network of secular ‘ex-Muslims’ who oppose the interference of religion in public life. The new group will be an alternative voice to bodies like the Muslim Council of Britain, she told the BBC, saying that many people who disagree with the opinions of religious leaders are scared of speaking out: “We do not think that people should be pigeonholed as Muslims or deemed to be represented by regressive organizations like the MCB.” She urged governments to stop dealing with Islamic organizations that were pushing their values on other people and limiting free speech.