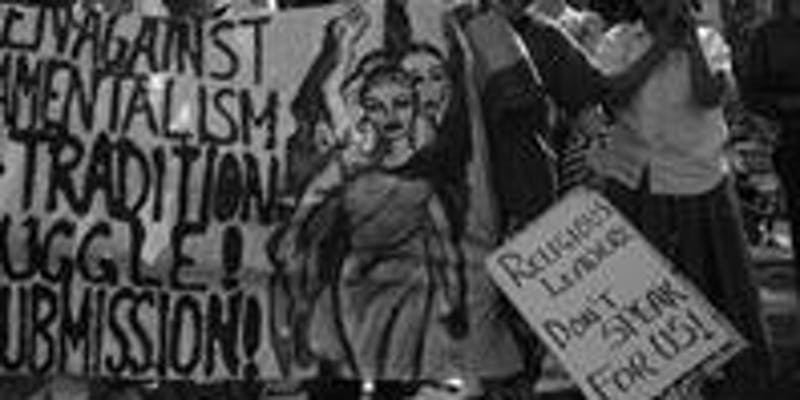 14 February, 6:30pm-10pm, Conway Hall, London Why we defended Rushdie and why it is still important today: 30 Years After On this Valentine’s Day, the 30th anniversary of the fatwa against Salman

Why we defended Rushdie and why it is still important today: 30 Years After

On this Valentine’s Day, the 30th anniversary of the fatwa against Salman Rushdie, join Feminist Dissent to defend the right to apostasy, to love, to flee persecution and seek asylum/Oppose blasphemy laws, the threat to free speech and the deportation of apostates.

“Hullabaloo over The Satanic Verses” and “Struggle or Submission? Women in Islam” (films by Gita Sahgal)

Maryam Namazie (secularist and human rights activist, commentator and broadcaster; co-founder of Council of Ex-Muslims of Britain and the One Law for All campaign)

Gita Sahgal (editorial collective member of Feminist Dissent; writer, film-maker, human rights activist; founder of the Centre for Secular Space which challenges fundamentalism in all religions and co-founder of Women Against Fundamentalism)

Salil Tripathi (writer and journalist; PEN International, Writers in Prison committee; author of The Colonel Who Would Not Repentand Offence: the Hindu Case.)

Background: On May 27, 1989, 40 women of many religions and none stood at Parliament Square to oppose a massive march of orthodox Muslims demanding the banning of Salman Rushdie’s novel The Satanic Verses, as well as a National Front demonstration making racist attacks on Muslims in Britain. The march by orthodox Muslims called for the promulgation of blasphemy law to protect Islam from what they saw as an attack on their religion. They were supporting a fatwa by Ayatollah Khomeni demanding that Rushdie be killed. Under the banner, ‘Our Tradition, Struggle Not Submission’, the women’s stand for Rushdie was part of their defence of their secular traditions and for their own right to read and dissent and to defend secular values and religious freedom. This was a foundational moment for Women Against Fundamentalism, a group committed to opposing the rise of fundamentalism in all religions across the world.

Although WAF no longer exists as a formal organization, many of its members have allied with other organisations to continue to campaign against fundamentalism’s impact on women and sexual minorities, as well as against blasphemy laws, and to support the growing movement of people known and unknown across the world who are fleeing from fundamentalist violence. In Britain, they oppose the UK government’s hostile environment against migrants and refugees, as well as the police’s failure to deal with death threats against atheists.

Conway Hall was the location of a benefit/fundraiser for WAF in August 1989. We are proud to be returning to this historic location to continue WAF’s work against fundamentalism and racism.