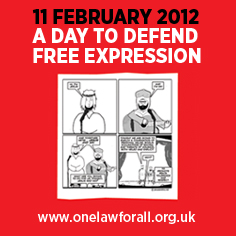 The One Law for All 11 February rally for Free Expression is being held in London from 14:00-16:00 hours at the Old Palace Yard opposite the House of Lords. [Here is leaflet for download and distribution.] The Council of Ex-Muslims of Britain fully supports and endorses the rally.

The call for action follows an increased number of attacks on free expression in the UK, including a 17 year old Rhys Morgan being forced to remove a Jesus and Mo cartoon or face expulsion from his Sixth Form College and demands by the UCL Union that the Atheist society remove a Jesus and Mo cartoon from its Facebook page. It also follows threats of violence, police being called, and the cancellation of a meeting at Queen Mary College where One Law for All spokesperson Anne Marie Waters was to deliver a speech on Sharia. More recently, the LSE Student Union has asked the atheist society to remove its affiliation to the union again due to a Jesus and Mo cartoon.

[To read Maryam Namazie’s recent speech on how accusations of offence and Islamophobia are secular fatwas, click here.]

In addition to the London rally, there will be actions and acts of solidarity in other cities, including Australia, France, Gambia, Germany, Poland and South Africa. To see the list or to add your own action or event, click here.

Clearly, the time has come to take a firm and uncompromising stand for free expression and against all forms of bogus accusations, threats and censorship.

The right to criticise religion is a fundamental right that is crucial to many, including Muslims.

11 February is our chance to take that stand.

You need to be there.

2. The rally is sponsored by The Richard Dawkins Foundation for Reason and Science UK.

3. See recent media coverage of the rally and/or attacks on free expression:

Strong religious belief is no excuse for intimidation, The Independent, 22 January 2012 [external link]