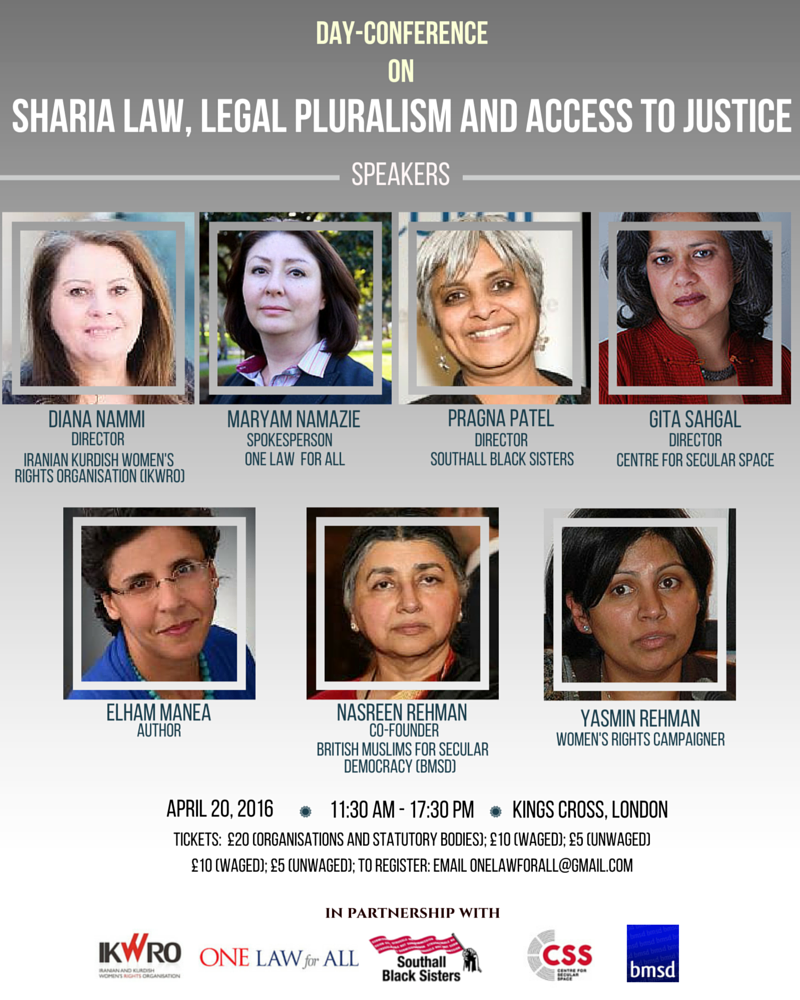 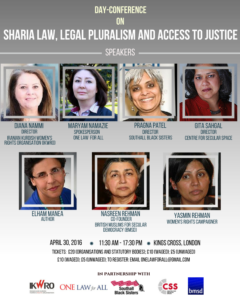 Elham Manea will present the findings of her new book Women And Sharia Law: The Impact Of Legal Pluralism In The UK. Women’s rights groups that led successful campaigns preventing public authorities such as the governing body of UK Universities and the Law Society from incorporating aspects of Sharia laws into their public policies will further present their case against Sharia courts and the Beth Din, legal aid cuts, and the denial of access to equality and human rights.

Tickets cost: £20 (organisations and statutory bodies); £10 (waged); £5 (unwaged). No tickets will be sold at the door. To register for the event, please post your name and telephone number with a cheque made payable to One Law for All to BM Box 2387, London WC1N 3XX, UK. You can also purchase tickets on Eventbrite. The event location will be sent to those who purchase tickets.

For any questions or to register, please email onelawforall@gmail.com.

11:30-11:40am Opening with MC Rayhana Sultan, Spokesperson of Council of Ex-Muslims of Britain

11:40-1:10pm Elham Manea, Academic and Author of “Women And Sharia Law: The Impact Of Legal Pluralism In The UK”

Diana Nammi is the Director of Iranian Kurdish Women’s Rights Organisation, which she founded in 2002 to provide advice, advocacy, training and counselling to women and girls from Middle Eastern and North African communities affected by so called “honour” based violence, including forced marriage and Female Genital Mutilation as well as domestic violence. In 2012 she was named in a list of 150 women who shake the world by Newsweek and The Daily Beast. In 2014 she received the Special Jury Women on the Move Award from UNHCR, The Forum and Migrants Rights Network, she was honoured with the Woman of the Year Award and was recognised as one of BBC’s 100 Women. In 2015 she won the Women of Courage Award from the Women’s Refugee Commission in New York, the XX1 Premis Ones Mediterrania Award in Spain and the Red Woman of the Year Community and Charity Award.

Elham Manea is an Associate Professor specialised on the Middle East, a writer, and a human rights activist. She is a Fulbright scholar who holds a PhD degree in political science from the University of Zurich, Master degree in comparative politics from the American University in Washington D.C, and a Bachelor degree in political science from Kuwait University. She has published several academic and non-fiction books including The Arab State and Women’s Rights: The Trap of Authoritarian Governance. She works at the Political Science Institute at the University of Zurich and a consultant for Swiss government agencies and international human rights organizations. Recently, she has been appointed by the Swiss Federal Council as a Member of the Federal Commission for Women Affairs. Her concept of humanistic Islam was first published in a series of articles in Arabic. Her most recent book is: Women And Sharia Law: The Impact Of Legal Pluralism In The UK.

Gina Khan was born in Birmingham to Pakistani Muslim parents. Gina is a Human Rights activist and researcher. Personal experiences prompted Gina to break her silence in 2005 by speaking out in radio debates and writing to local Birmingham newspapers following a traumatic divorce and experience of living as a lone woman and parent in Birmingham. Gina focuses on two main subjects; the rise of pro-jihad ideologies within Muslim communities and the position and status of women within those communities. Gina believes these two twin phenomena to be symptomatic of deeper problems. After speaking out against Jihadism in Birmingham, Gina and her children were forced to leave her home after it was attacked.

Gita Sahgal is a writer, journalist, film-maker and rights activist. She is currently Founder and Director of Centre for Secular Space. She was formerly Head of the Gender Unit at Amnesty International; she was suspended in 2010 after she was quoted criticizing Amnesty for its high-profile associations with the Islamist Moazzam Begg, the director of a campaign group called Cageprisoners. For many years she served on the board of Southall Black Sisters and was a founder of Women Against Fundamentalism and Awaaz : South Asia Watch. With Nira Yival Davis, she edited Refusing Holy Orders: Women and Fundamentalism in Britain (London, 1992). Among her articles are ‘Legislating Utopia? Violence Against Women, Identities and Interventions’ in ‘The Situated Politics of Belonging. During the 1980s, she worked for a Black current affairs programme called ‘Bandung File’ on Channel 4 TV. She made two films about the Rushdie affair, ‘Hullaballoo Over Satanic Verses’ and ‘Struggle or Submission’. She has also made two programmes for Dispatches Channel 4, ‘The Provoked Wife’ on the case of Kiranjit Ahluwalia and ‘The War Crimes File’ an investigation into allegations of war crimes committed by members of the Jamaat I Islami in Bangladesh in 1971.

Kate Smurthwaite is a stand-up comedian and political activist. She has appeared on more than 500 TV and radio shows including This Morning, The Big Questions, Woman’s Hour and The Moral Maze. In 2013 she won a Three Week’s Editor’s Choice Award for her show at the Edinburgh Festival. Kate is a writer for BBC Three show The Revolution Will Be Televised and is the Vice Chair of Abortion Rights UK.

Maryam Namazie is the Spokesperson for One Law for All Campaign against Sharia Law in Britain and the Council of Ex-Muslims of Britain. She hosts a weekly television programme called Bread and Roses broadcast in Iran via New Channel TV. She is on the International Advisory Board of the Raif Badawi Foundation for Freedom; Humanist Laureate at the International Academy of Humanism, Central Committee member of the Worker-communist Party of Iran; National Secular Society Honorary Associate; Honorary Associate of Rationalist International; Emeritus Member of the Secular Humanist League of Brazil; a Patron of London Black Atheists and Pink Triangle Trust and a member of the International Advisory Board of Feminist Dissent. She was awarded Atheist of the Year by Kazimierz Lyszczynski (2014); Journalist of the Year at the Dods Women in Public Life Awards (2013); selected one of the top 45 women of the year by Elle magazine Quebec (2007); one of 2006’s most intriguing people by DNA, awarded the National Secular Society’s Secularist of the Year Award (2005), amongst others.

Nasreen Rehman is an award winning playwright and screenplay writer. She co-founded British Muslims for Secular Democracy. Nasreen believes that for far too long the British public sphere has been ceded to obscurantist voices representing their own version of Islam. BMSD is an organisation that challenges these voices and seeks to appropriate this space in order to forward a different and more enlightened face of Islam – one that is more democratic and equitable. She represents BMSD at conferences in the U.K. and Europe and engages in media debates on topics such as Islamophobia and the hijab. She also serves on the Board of Akademi, a lead organisation for South Asian dance, in Britain; and is a founder member of the Women’s Action Forum (WAF) a women’s rights movement in Pakistan. In the past, she has worked as an economist in the private sector and in development, in the U.K and in Pakistan. As director of the Mahbubul Haq Human Development Centre, in Islamabad she steered the publication of the Report on the Crises of Governance in South Asia, and helped to develop the terms of reference for the Centre’s report on Gender in the region. As trustee of the Runnymede Trust, she served on two national commissions on anti-Semitism and Islamophobia, respectively.

Pragna Patel is Founder and Director of the Southall Black Sisters and Women Against Fundamentalism. SBS is, a multi-award-winning women’s organisation founded in 1979 to address the needs of black and minority women experiencing gender violence. It successfully campaigned for the release of Kiranjit Ahluwalia, a landmark case in which an Asian woman was convicted of the murder of her violent husband. The case reformed homicide law, creating greater awareness within and outside minority communities. Pragna is also a co-founder of Women Against Fundamentalism. She has also written extensively on race, gender and religion, including ‘Citizenship: Whose Rights?’, ‘Faith in the State? Asian Women’s Struggles for Human Rights in the UK’, and ‘Shrinking Secular Spaces: Asian Women at the Intersect of Race, Religion and Gender’. She was listed in The Guardian’s Top 100 women: activists and campaigners.

Yasmin Rehman is a freelance consultant and doctoral candidate at the School of Oriental and African Studies. Her area of research is polygamy and the law. She has worked for more than 20 years predominantly on violence against women, race, faith and gender, and human rights. Yasmin has worked for Local Government, the Metropolitan Police Service as Director of Partnerships and Diversity (2004-08) during which time she also held the Deputy national lead for forced marriage and honour based violence. Yasmin has most recently been commissioned as founding CEO of a race equality charity in East London, followed by Transforming Rehabilitation bid and now reviewing police responses to domestic abuse for national charities. Yasmin is currently member of the Board of EVAW (End Violence Against Women Coalition), an Independent Adviser for City of London Police and a member of the Centre for Secular Space.