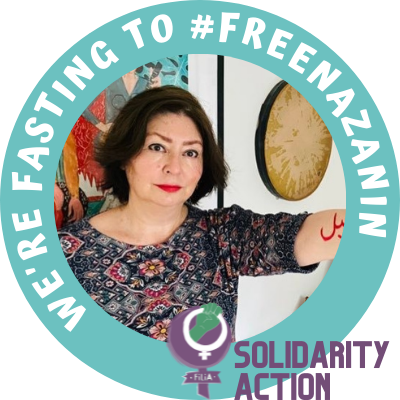 CEMB Spokesperson Maryam Namazie and FILIA CEO Lisa-Marie Taylor launched #Women4Nazanin Solidarity Action by starting a 24-hour fasting relay on 20 December. So far, over 750 women have registered to hunger strike for a day until Nazanin is free.

Nazanin Zaghari-Ratcliffe is a British-Iranian woman taken hostage by the Islamic regime of Iran for over five years now.

Maryam Namazie says: Hostage-taking is a human rights issue and not merely an issue of debts due Iran from the British government. Many governments have debts; only the Iranian regime takes innocents hostage for political gain. Furthermore, what about debts of justice owed to those who have been killed, imprisoned and taken hostage for over 40 years by the regime? If there is a question of debt, it is the debt of justice due to people of Iran for the regime’s gross violations. And also for the British government’s continued relations with the regime (at worst) and its silence (at best) on the issue of human rights.

Women – keep registering to fast for a day and send a message to Boris Johnson and Iranian regime to #FreeNazaninNow.