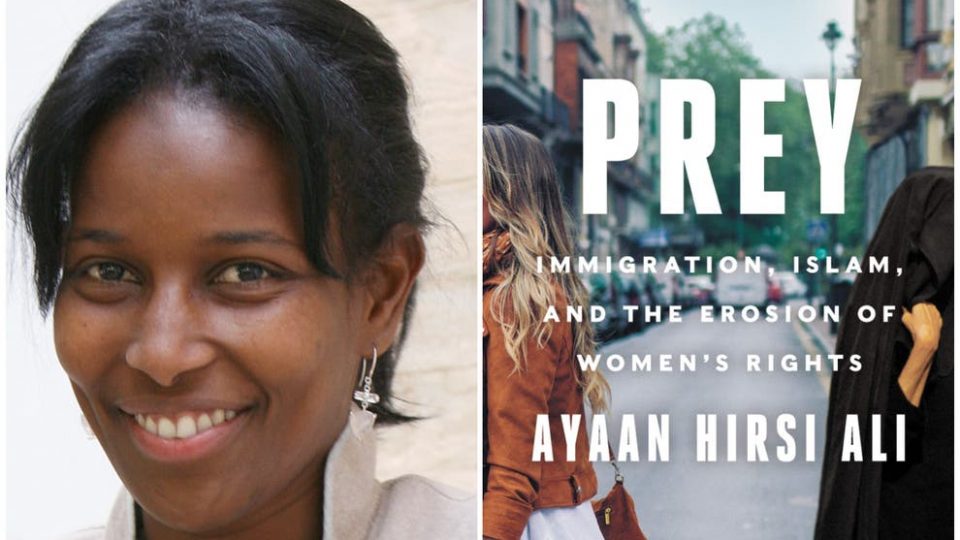 In her new book , the Somali-born critic of Islam appears more concerned with defending the criminalisation of migration than finding solutions to end the rise in sexual violence against women in the UK and Europe, says Maryam Namazie

Ayaan Hirsi Ali is a Somali-born critic of Islam and Islamism.

In 2004, she became known internationally after Dutch director Theo van Gogh was murdered for a short film she had written called Submission on women’s subservient status in Islam. The Islamist who murdered him, threatened that she would be next.

In 2006, Hirsi Ali co-signed a Manifesto against Islamism, which stressed that the fight against this new totalitarianism was ‘not a clash of civilisations’ between West and East, but a struggle between democrats and theocrats the world over.

The rise of the Council of Ex-Muslims of Britain and the ex-Muslim movement in the West, defending the right to leave and criticise Islam without fear, meant that her work was relevant to many. She left the Netherlands to join a conservative think tank in the US soon after a controversy over her Dutch citizenship and has been there ever since.

The premise of Hirsi Ali’s new book Prey: Immigration, Islam and the Erosion of Women’s Rights is that there is, in fact, a clash of civilisations and that the rise in sexual violence in Europe since 2015 is due to an increase of migrant men from Muslim-majority countries with sexist attitudes.

She says the British grooming gangs illustrate ‘the persistence of misogynistic attitudes in immigrant Muslim communities.’ She adds that ‘increasing numbers of Pakistani-British men have become involved in crime since the 2000s’ in the UK and that there have been ‘significant increases [in sexual violence offences] in several regions and countries (England, Wales, Denmark, Sweden) after 2015, which surely cannot be explained away by technicalities.’

Undoubtedly, sexual violence is pervasive and on the rise in the UK, Europe and everywhere. For example, incidents of rape per 100,000 are higher in Australia and the US than a majority of European countries. According to WHO, most sexual violence is carried out by an intimate partner, not a stranger. This violence has been greatly exacerbated during lockdown.

Despite the numbers, violence against women is ignored not because of ‘political correctness’ as Hirsi Ali states, but because it is hardly taken seriously – no matter who commits the crime.

Discriminatory rape laws, weak enforcement, lack of investigations and prosecutions, low reporting of rape due to distrust, austerity measures shrinking access to justice, lenient sentencing, victim blaming, and limited consent-based legislation are some of the reasons that perpetrators – whether they are grooming gangs, wolf-pack rapists or priests – do not face justice.

The common denominator of the sexual violence pandemic is not men from Muslim-majority countries but men who commit sexual violence and the states that fail, again and again, to hold them to account.

Nonetheless, Hirsi Ali insists there a causal relationship between increased migration and increased sexual violence. To show this, she relies on statistics she herself admits are ‘fraught with difficulty’ whilst also acknowledging that police in most European countries, including the UK, do not record perpetrator migration status or religion.

In order to show how migrant men from Muslim-majority countries are different from what she calls the native-born, she places them in the four categories of: adapters (whom she says are ‘a minority’), menacing types, fanatics, and coasters (those presumably on welfare). For her, a ‘plausible explanation for the apparent adaption deficit is the attitude of Muslim migrants toward women.’ And by Muslim migrants, she means ‘new arrivals seeking asylum’ and ‘the sons and even grandsons of immigrants.’

But sexism is not in someone’s DNA because of a lottery of birth. Those in power determine the dominant culture and use force to impose it, hence why many flee. Also, no community, population or society are monoliths. Culture isn’t static. It’s constantly changing and being revised, reviewed and challenged by individuals with agency. In Iran, for example, there is a tsunami of atheism and a vibrant women’s liberation movement despite a repressive theocracy.

This is not to say that migrants are collectively good just as they are not collectively bad. Nor are all beliefs and cultural practices equal or equally valid. But it is those who commit crimes that must be prosecuted and held accountable for sexual violence. Whether they are Muslim, ex-Muslim or Christian. Jewish, Hindu, atheist or Buddhist. Whether they are citizens or new arrivals. Whether they are documented or undocumented. Guilt by association and the placing of collective blame on migrant men from Muslim-majority countries, however, are tribalistic with no place in a modern justice system.

For someone enamoured with ‘Western civilisation,’ Hirsi Ali should understand individual rather than group accountability for crime. Her emphasis on migrant men from Muslim-majority countries means that her solutions are focused on migration control rather than ending sexual violence. They include severe punishments for minor infractions, increased southern border security, enlarged defence budgets, expanded surveillance, and further military interventions as well as the scrapping of the asylum regime and the deportation of those who don’t subscribe to or adopt western values. Which ‘western values’ is unclear: hers, Douglas Murray’s, Donald Trump’s and Tommy Robinson’s, or that of Martin Luther King, Emmeline Pankhurst and the Tolpuddle Martyrs.

She also recommends that welfare be connected to behaviour and that migrants be screened, including by a psychologist, for their ‘ability to adapt.’ She doesn’t seem concerned about what will happen to freedoms of conscience and expression that are the cornerstones of Western – or more accurately, universal – values. Or that linking the right to social services and asylum to ethically bankrupt concepts of morality are a rehashing of Victorian notions that blame poverty on the culture and character of the so-called undeserving poor.

She ends her book as she begins it – with scaremongering: ‘Do we want a Europe in which photographs of female life taken before 2015 become objects of fascination, like [those] that the central character censors in Atwood’s sequence to the Handmaid’s Tale…?’

Written during Trump’s presidency, and published only in the US, Hirsi Ali’s book on the UK and Europe panders to Trumpian and populist politics. It is more concerned with defending the racialisation of crime and the criminalisation of migration than ending sexual violence. Clearly, even if all her solutions are carried out to the letter, violence against women will still be a pandemic. But that is not, after all, the point of her book.