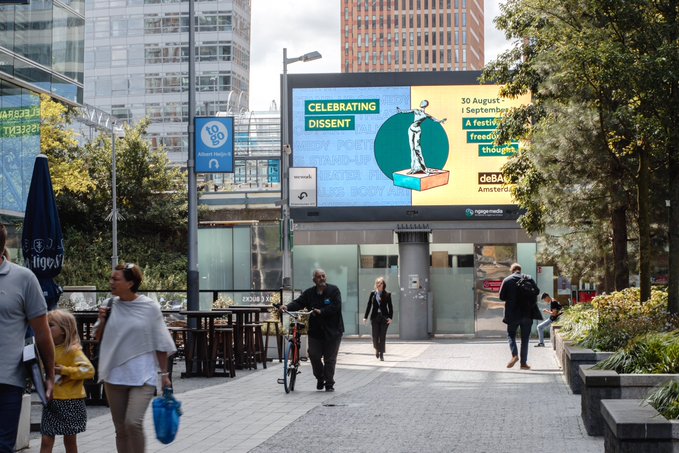 The epic ‘Celebrating Dissent’ Festival took place between 30 August -1 September in Amsterdam, a collaboration between the prestigious art and debate institute De Balie and Maryam Namazie.

Consisting of a mixture of intense, probing conversations, comedy, art, poetry and dance performances, films, lectures and protest, the weekend was an education in the issues facing dissenters fighting religious constraints and the religious-Right. The work of ex-Muslims and women campaigners was particularly evident.

More than 50 speakers from 30 countries worldwide discussed Women’s Dissent; Touching the Holy Subject; Comedy, the Sacred and Islamophobia; Separation of Religion from the State; Women against Gods; Identity; and Fighting the Far-Right. The deep wound left by silence within families was portrayed in a gut-wrenching film ‘No Longer Without You’ by Nazmiyeh Oral. Nadia El Fani’s  brave film ‘Neither Allah nor Master’ explored the importance of laicité. Speaker upon speaker showed how some of the most vibrant responses to fundamentalism have come from the universal desire for freedom – especially where survival has become synonymous with challenging religion and the religious-Right.

To highlight the dangers facing dissenters, a public protest of 160 balloons with the names of those persecuted or murdered for blasphemy and apostasy was held. Participants at the Festival carried balloons to a nearby square and chalked the names of dissenters into the pavement as a memorial of sorts.

The historic event was an astounding celebration of apostasy, blasphemy and dissent. From the moment the city’s Mayor, Femke Halsema, opened the festival by welcoming ‘heretics, infidels and renegades,’ it was clear that this would be a historic and remarkable festival committed not only to defending free thought and expression but also the lives and freedoms of dissenters.

Celebrating Dissent: Interview Marathon with Zineb El Rhazoui. An empty chair since she was prevented from coming by Dutch government.

There was also artwork by Mahshad Afshar and Jenny Wenhammar.