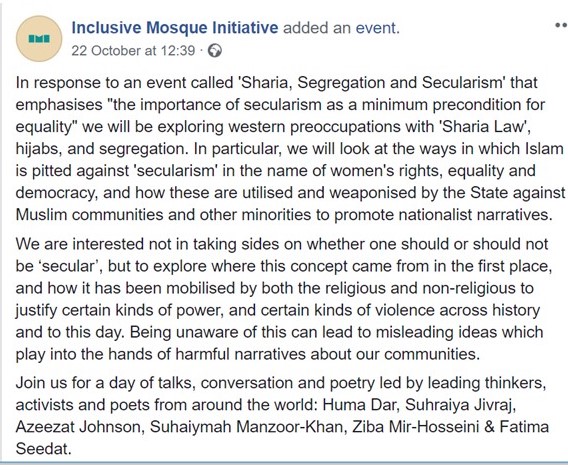 Inclusive Mosque, why so afraid of CEMB?

Inclusive Mosque Initiative has declined to join us in a friendly debate on women’s rights and Sharia. No surprise there.

As you may know, prior to the 25 November International Conference on Sharia, Segregation and Secularism, they organised an event in response to ours before it had even taken place. They basically accused us of promoting a nationalist and western agenda because of our defence of secularism and universal rights. We asked them why they were so afraid of secularism.

Following their event, which was full of misinformation, we invited them to a friendly debate on the issues. What better way to debate and discuss than to do it face to face? “Inclusive” Mosque, however, have declined our invitation, now also accusing our conference of “transphobia” to which Sadia Hamed has asked for clarification. In any case, our conference proceedings are available online for everyone to see (we look forward to a video of their conference soon).

Of course, “Inclusive” Mosque could have just come and defended their views and heard what we had to say rather than making false accusations and using demagoguery, but given that no one is willing to even sign their name to their emails, that seems to be too much to ask.

Hopefully, eventually, the “Inclusive” mosque will reach the political maturity to argue its case and listen to views it disagrees with. In the meanwhile, though, one small suggestion for them: rather than spending time attacking those of us who are victims and survivors of Sharia and Islamism – many of whom are LGBT and migrants too by the way – why not spend more time focusing on criticising Islamists and the religious-Right at least? It’s really not that hard. Try it sometime.

Below are the emails sent and received by Council of Ex-Muslims of Britain (CEMB):

We would like to formally invite you to take part in a friendly debate about Women’s rights, Islam and Secularism for International Women’s day on Saturday 9th March 2019.

Ideally we would have 3 speakers each, who would each make a short opening statement, followed by a debate and end with closing statements. It is important for us to have open and honest dialogue, we are hoping to help facilitate such a discussion.

Council of Ex Muslims of Britain

Dear Sadia,
Thank you for the invitation, but we will have to decline. As a rule we don’t participate in public debates as we don’t find these to be constructive platforms for discussion.
We were also concerned by the transphobia at the Secular Conference this year, of which CEMB was a sponsor, and would not want to subject ourselves or our community to any similar statements made at this debate.
Sincerely,
Inclusive Mosque

Thank you for responding to our message and clarifying that you are only willing to speak about us but not to us.

Sitting together for an adult discussion, enables individuals with different beliefs and ideas to see humanity of one another, however apostates have long been dehumanized in Islam, therefore we understand your ignorance and unwillingness to engage with us.

Lastly, could you please clarify the “transphobia” at the Secular Conference? I certainly do not recall anything of this nature.