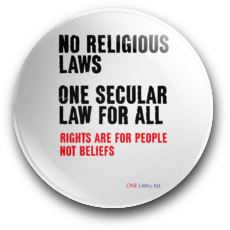 Manifesto on Women and Secularism

Manifesto on Women and Secularism

Today, far-Right movements, including religious fundamentalisms, are seizing power and on the rise in both democratic and authoritarian states. Even in more secularised societies, religious organisations have gained power because they have been considered valuable allies – to provide services as the state shrinks, to oppose radical social justice movements, as part of counter-terror strategies and post conflict ‘stabilisation,’ and as part of the privatisation of law. From development banks to Western aid and human rights organisations, fundamentalists, particularly Islamists, have been promoted in the name of minority and religious rights. The growth of community based ‘Sharia’ and other parallel legal systems is part of this process of acquiescence and promotion by western states and international institutions as much as by fundamentalist regimes and movements.

When far-Right movements, including religious fundamentalists, take power or gain social acceptance, women are the first targets. They erase women from the public space, treat them as second-class citizens and consider them extensions of family and religious and national honour, not individuals with universal human rights.

On the 70th anniversary of the Universal Declaration of Human Rights, we recall that the peoples of the world came together in the hope of ending war, colonialism and fascism and ensuring human rights for all regardless of sex, race, citizenship or other status.

These struggles insisted on our common humanity and equality – not difference or superiority. Yet, we are concerned that many of the struggles that constituted universal rights have been erased from history and labelled ‘western’ by regressive identity politics. Those who see human rights and secular values as ‘western’ simply negate the history of local African, Middle Eastern and Asian struggles for secularism and do not recall that secular values were clearly understood to be the only framework which could build multi-ethnic, multi-religious, plural societies based on the emancipation of women and minorities.

Today, we acknowledge that we owe our rights to liberationand civil rights struggles across the globe, which created the foundation of modern human rights, including the right to women’s equality, freedom of expression and freedom of conscience, i.e.  freedom of and from religion.   We confirm our opposition to the fascist far-Right as we oppose all religious fundamentalisms. One feeds into the other. They are complementary and indispensable to each other. One can never excuse the other. We affirm the centrality of the universality of rights and the principle of secularism – the complete separation of religion from the state – to ensure that religion cannot influence the state and public policy and impose itself on private lives.

‘One Law for All’ stands for the struggle for universalism, secularism and against religious oppression.

On the 10th anniversary of One Law for All, we call for:

1. The promotion of a universal human rights-based approach for all, especially women and minorities, including the right to access changeable civil and secular laws voted on by the people rather than unchangeable ‘divine’ laws.
2. The right to freedom of conscience and expression, including the right to blasphemy and apostasy.
3. The abolition of religious–based laws in family, civil and criminal matters, in particular when they violate human rights, and ending community-based ‘Sharia’ and other religious ‘courts’, and customary councils such as jirgas and panchayats, and other ‘arbitration’ systems.
4. Improved access to justice, including comprehensive legal aid.
5. The promotion of gender equality and abolition of restrictive religious and cultural codes and customs that hinder and contradict woman’s rights and independence.
6. The prohibition of gender segregation, compulsory veiling and other stigmatising practices such as considering menstruation a form of pollution, in educational and other public spaces that seek to disempower women and girls and stigmatise marginalised groups.
7. The abolition of religious laws and practices that violate children’s rights to education, information, creativity and freedom of expression, including child veiling, child marriage, sexual abuse, ritual abuse, child mutilation and exploitative practices involving children in religious ceremonies.
8. Countering both racist and fundamentalist discourses whether they appeal to Sharia, fascism, anti-Semitism, casteism or any ideology which denies the universal dignity of every human being.
9. States and civil society to examine the ways in which laws, policies and practices violate human rights by promoting, tolerating or acquiescing in racism against minorities, migrants and refugees and using fundamentalists as allies to counter terrorism, conduct war, or ‘stabilise’ post-conflict societies.
10. The recognition that secularism is a basic human right and a minimum precondition for women’s and minority rights.
Maryam Namazie
www.maryamnamazie.com
0 comments 153 views