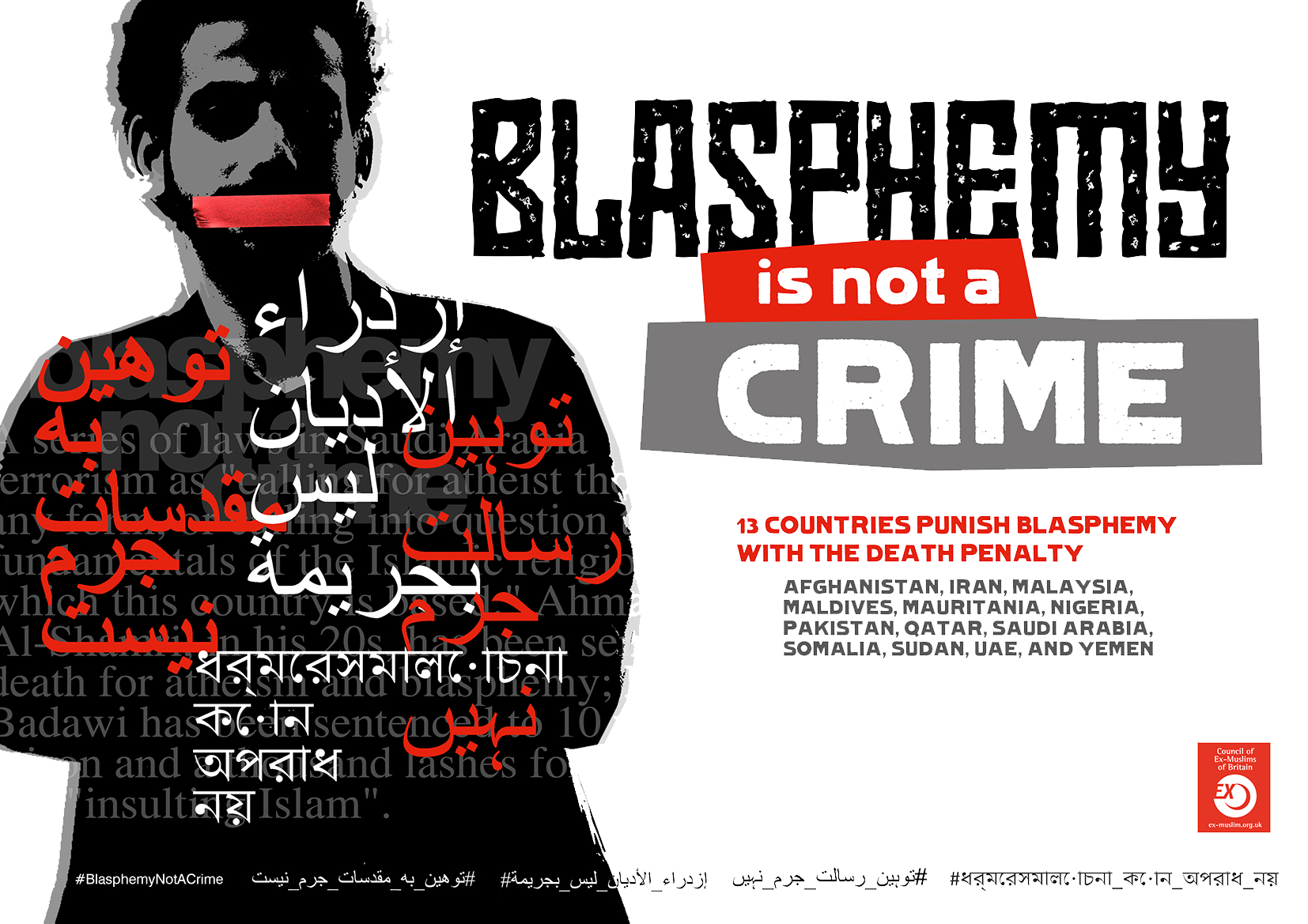 We wanted to bring your attention to several urgent actions and also give you an update on some of our activities and upcoming events.

You may have heard that Egyptian atheist blogger Sherif Gaber was arrested on 2 May at Cairo airport when attempting to leave the country. Whilst he is reportedly free, ex-Muslim groups are awaiting confirmation that he is safe. There is a pending blasphemy case against him still so please keep the pressure on and sign the petition demanding his safety. More information on his case available here.

Join our #NotACrime Campaign calling for the decriminalisation of laws that imprison, harass and execute atheists, apostates, and blasphemers. The campaign aims to highlight the cases of those who are in prison or on death row for the exercise of their basic right to conscience, which includes the right to criticise and renounce religion. Please join us in defending the likes of Sina Dehghan on death row in Iran for “insulting the prophet”, Ayaz Nizami facing the death penalty on accusations of blasphemy in Pakistan and Ahmad Al-Shamri and Raif Badawi charged with apostasy and blasphemy in Saudi Arabia. More details can be found here.

In April, CEMB organised it’s first “Coming Out Party”; which is one way of seeing people’s coming out as atheists as a cause for celebration rather than vilification. Our monthly meet-ups continue as usual; the next two meet-ups will be on “apostasy and asylum” and “honor and shame”.  We have also begun monthly support groups to give ex-Muslims a space to share issues. So far, the group has discussed shunning, identity and post-apostasy trauma. If you want to join any of the above, please email exmuslimcouncil@gmail.com.

You can find out more about our upcoming events, which includes a fast-defying protest in support of those persecuted for eating during Ramadan here.

CONFERENCE ON SHARIA, SEGREGATION, AND SECULARISM

Following the historic 22-23 July 2017 international conference to mark the CEMB’s 10th anniversary, which was the largest gathering of ex-Muslims in history, we are now organising a 2018 conference on November 25 on Sharia, Segregation, and Secularism with One Law for All and others. For more information and to get your tickets click here. No tickets will be sold at the door.

Hold 23 March 2019 in your diaries. It will be the first ever International Atheist Day to defend the right to atheism and call for an end to the persecution of atheists worldwide. Contact organisers for more information or to become an organiser in your city.

WE CAN COME TO YOUR UNIVERSITY TO SPEAK

We continue to highlight the situation of ex-Muslims and defend freedom of expression, blasphemy, apostasy, and secularism, including at the anniversary of the attack on Charlie Hebdo and for FEMEN’s 10th anniversary. You can see our past and upcoming engagements here. We will be speaking at the European Parliament this month.

If you would like to organise a screening of Deeyah Khan’s film Islam’s Non-Believers and have us come and speak at your university or event, please get in touch.

Some of our latest interviews and speeches:

You can see other media coverage here.

Thanks to all of you who have been supporting our work, especially via monthly direct debits. If you can, please donate towards our work in the coming year. Any amount helps and is greatly appreciated!

We also need more volunteers, particularly video and film directors and graphic designers. Get in touch if you have time to help us out.

Hope to see you at some of our upcoming events and speaking engagements and looking forward to hearing from you.