Muslim hate preacher or misunderstood scholar? Top US imam heads to London and into a storm, IBT, 26 October 2017

Muslim hate preacher or misunderstood scholar? Top US imam heads to London and into a storm, IBT, 26 October 2017

The Future belongs to blasphemers

International Blasphemy Day has just past. Watch this inspiring video made by ex-Muslims in various countries: The Future Belongs to Blasphemers.

Also see the world’s first group bodypaint captured by both ground and drone in solidarity with ex-Muslims.

Some will ask why we must celebrate blasphemy when it is “hurtful” and “offends”.

The answer is simple:

Because people can be killed for blaspheming and human life is more important than hurt sensibilities and offence.

As the Jordanian atheist, Mohammed Al Khadra said at the largest gathering of ex-Muslims in history, “Where are your priorities? While we die, you are all thinking about Islamophobia?”

Islamophobia is a political term used to scaremonger people into silence; it imposes de facto blasphemy and apostasy laws where none exist. Where such laws exist, there are no accusations of “Islamophobia” but rather imprisonment, persecution and execution.

Another speaker at the July conference, Zineb El Rhazoui, who survived the attack on Charlie Hebdo because she was back in Morocco says “the right to blasphemy [marks] the boundary between barbarism and civilisation.”

As the new edition of CEMB’s publication: “The Political and Legal Status of Apostates in Islam” shows, it is especially dangerous for ex-Muslims living under Sharia.

CEMB is organising a protest at the Pakistani and Iranian embassies in London on 10 November to highlight a number of cases facing the death penalty such as that of Sina Dehghan, Soheil Arabi and Ayaz Nizami.

We are also campaigning for activists like Iraqi atheist Karrar Al Afsoor who has fled to Greece where he is being detained in awful conditions.

Despite the targeted persecution and slaughter of freethinkers, though, it is we who are still being blamed for the threats we receive and even when we are murdered – like the woman whose rape is blamed on the length of her skirt.

We are outrageously even compared to Nazis for marching for LGBT and ex-Muslim rights at Pride in London by “progressives” who prefer to side with Islam and Islamism than with dissenters. [As an aside, Pride in London is still deciding whether to allow CEMB back at Pride next year given complaints(!) by the homophobic East London Mosque. CEMB has called on Pride to do the right thing.]

Thankfully, there are many who continue to support our work and the right to freedom of conscience and expression. This support has meant a great deal to us and enabled us to continue the important work we do.

Please continue to support us via donations (no matter how small), volunteering your skills (we especially need help with film editing and graphic design), as well as attending our protests and events. Sadia Hameed and Maryam are speaking at a number of events in Belgrade, Cambridge, Koln, Massachusetts, Melbourne, Nottingham, Pennsylvania and Rome.

In London, at our monthly meet-ups, we have everything from an ex-Muslim art workshop to “coming out parties” for ex-Muslims who decide to go public.

We hope you can join us at some of our events, including our 10 December End-Year event with food, drinks, speeches, music and dancing. Get your tickets to join us as soon as you can.

By the way, Deeyah Khan’s film, Islam’s Nonbelievers, which was about the work of CEMB and the situation of ex-Muslims in Britain and internationally has been shortlisted for the Asian Media Awards in Investigative Journalism.

Thanks again for your support.

Looking forward to hearing from you or seeing you at some of our events.

Good news! Karrar has been released from detention. Thanks to everyone who advocated on his behalf. Here is a message from Karrar himself: 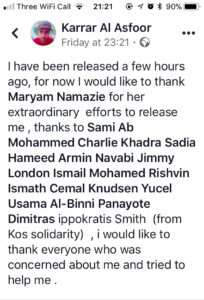 *****
Karrar Al Asfoor (Karrar Hamza, number 550) is an atheist from Najaf, Iraq who has been  active with Arab Atheists and the Forum for Humanitarian Dialogue , a Facebook discussion group of 44,000 members that promotes the right to freedom of belief and expression in the Middle East and North Africa.

Council of Ex-Muslims of Britain and other ex-Muslim organisations have worked with Karrar for several years, including around Facebook’s censorship of Arab atheist pages.

Karrar was an invited speaker to the July 2017 International Conference on Freedom of Conscience and Expression in London, the largest gathering of ex-Muslims in history, but his visa was denied.

He was forced to flee Iraq soon after due to threats to his life. He is currently being detained in abysmal conditions at Hotspot, Kos Island, Greece where he has applied for asylum.

Karrar is a known ex-Muslim activist who has a well-founded fear of persecution. In Iraq, atheists face threats and intimidation. Islamic parties have increased rhetoric against atheists.

Ex-Muslim organisations and activists call on the Greek government to release Karrar and grant him protection and asylum immediately.

We ask also that the public contact the authorities and advocate on his behalf.

You may write to:

Please also contact Greek embassies in your country of residence.