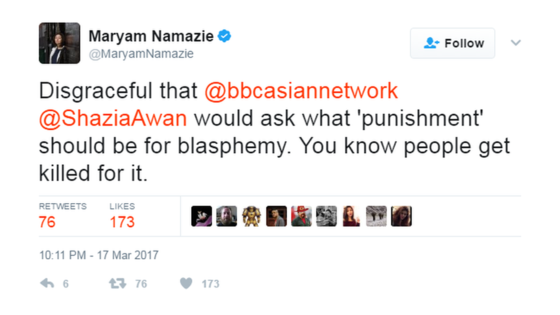 Attacks on freethinkers and the celebration of apostasy and blasphemy

On 16 March, ex-Muslim atheist H Farook, a father of two, was hacked to death in India. He was known to our Sri Lanka affiliate organisation and was killed for his views. Several men have been arrested for his murder.

In Pakistan, Ayaz Nizami and Rana Noman have been arrested by the government on 22 March. A report in a Pakistani paper says they were arrested for uploading “blasphemous content”, including on ” Atheist & Agnostic Alliance Pakistan and CEMB forum” sites.

This follows the Pakistani government’s request that Facebook and Twitter help identify those suspected of blasphemy so it can prosecute them or pursue their extradition.

CEMB is extremely concerned for the safety and welfare of freethinkers in Pakistan and elsewhere. The government of Pakistan (and also Facebook and Twitter) must be reminded that the right to religion has a corresponding right to be free from religion and that blasphemy and apostasy are part and parcel of free conscience and expression not crimes!

This is something that the BBC needs reminding, too, given that its Asian Network asked: “What is the right punishment for blasphemy” as if blasphemy should be a punishable offence. (The BBC was forced to apologise after widespread condemnation.)

The normalisation of de jure or de facto blasphemy laws and accusations of Islamophobia when religion is criticised have created a climate where Islamic states feel free to persecute freethinkers with impunity. Motions such as the anti- Islamophobia motion passed by the Canadian parliament are no different to de facto blasphemy laws, which aim to silence critics of Islam and ex-Muslims.

It’s crucial that we defend blasphemers and apostates unequivocally and ensure that freedom of conscience and expression are upheld for all – believers and nonbelievers alike.

Safe Spaces and Freedom of Expression

Ironically, de facto blasphemy laws continue to apply at many universities in Britain and elsewhere, including under the guise of “safe spaces”. According to a recent report, more than nine in 10 UK universities are restrictive of free speech. Our Spokesperson Maryam Namazie continues to face restrictions of varying degrees, which are now more covert though no less sinister. You can find out about recent restrictions at Westminster, LSE and Goldsmiths here.

The adverse effects of safe spaces on free expression (in particular for minorities within minorities) is discussed by Maryam and Sarah Haidar of Ex-Muslims of North America at a recent Centre for Inquiry Women in Secularism conference. Maryam’s speech on the veil and women’s resistance is also available for viewing.

(As an aside, for more in depth coverage and interviews on apostasy, blasphemy and more, watch Maryam and Fariborz Pooya’s weekly taboo-breaking TV programme Bread and Roses in Persian and English, which has been deemed “immoral” and “corrupt” by the Islamic regime in Iran.)

CEMB is pleased to announce that our Spokesperson Sadia Hameed is IKWRO Winner of Special Recognition: Activist of the Year for her work against honour-related crimes. Sadia has also just launched Critical Sisters.

Furthermore, our congratulations goes out to Yasmin Rehman, winner of this year’s NSS Secularist of the Year award. Yasmin has spent the past two years bringing attention to hate crimes against ex-Muslims, amongst other important work.

In the face of increasing persecution and censorship, our upcoming international conference aims to mark our 10th anniversary by celebrating apostasy and blasphemy and the free word. It will be an historic event and is not to be missed.

Buy your tickets today! No tickets will be sold at the door.

Please feel free to join us for monthly discussions and debates in London. The next few meet-ups are as follows:

Tuesday 4 April 2017, 6:30pm-8:30pm, Evening with Wissam Charafeddine, Co-Founder, Muslimish Support Network on Why the Classical Proof of God Does Not Work Anymore (based on his background on Islamic theology)

Tuesday 27 June 2017, 6:30pm-8:30pm, Evening with Rahila Gupta, Journalist and Activist on Rojava, Northern Syria and secular space in the middle of a war

PLEASE NOTE: There is a new venue for our monthly meet-ups; if you would like to attend, please email exmuslimcouncil@gmail.com to register and receive further information. If you already know the new location, just show up. Suggested donation: £3 waged; £1 unwaged.

We will be speaking at a number of externally organised events in the next few months, including an Atheist Weekend in Poland, Defending Progressivism Conference in London, and a Rationalist Conference in Finland.

For the first time ever, a CEMB contingent will march in the Gay Pride Parade on 8 July. If you want to join us in the parade, email us.

Please take some time to volunteer with us if you have time to spare; we especially need help with graphic design for leaflets, posters, and banners. Please donate to our organisation if you are able to. No amount is too small and much of what we do has been made possible with your donations. You can donate to CEMB here.

Thanks again for all your support; a special thanks to those who donate on a monthly basis.   We hope to see you at some of our events.