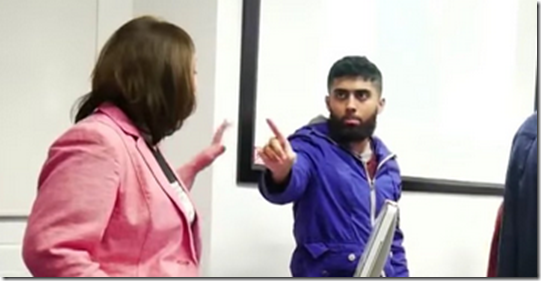 CEMB spokesperson Maryam Namazie spoke on “Apostasy, Blasphemy and Free Expression in the Age of ISIS” on 30 November 2015 at Goldsmiths University at the invitation of the Atheist, Secularist and Humanist Society (ASH). See Video Below.

The night before her talk, the ASH president received an email from the president of Goldsmiths Islamic Society (ISOC) saying the following:

As an Islamic society, we feel extremely uncomfortable by the fact that you have invited Maryam Namazie. As you very well probably know, she is renowned for being Islamophobic, and very controversial.

Just a few examples of her Islamophobic statements, she labelled the niqab- a religious symbol for Muslim women, “a flag for far-right Islamism”. Also, she went onto tweet, they are ”body bags” for women. That is just 2 examples of how mindless she is, and presents her lack of understanding and knowledge about Islam. I could go on for a while if you would like further examples.

We feel having her present, will be a violation to our safe space, a policy which Goldsmiths SU adheres to strictly, and my society feels that all she will do is incite hatred and bigotry, at a very sensitive time for Muslims in the light of a huge rise in Islamophobic attacks.

For this reason, we advise you to reconsider your event tomorrow. We will otherwise, take this to the Students Union, and present our case there. I however, out of courtesy, felt it would be better to speak to you first.

On  the day of Maryam’s talk, the “ISOC Brothers'” Facebook Page [the ISOC Sisters’ have a separate closed page) posted the following, which has since been deleted:

Despite claims of “safe spaces” and concerns about “bigotry”, the Goldsmith ISOC never made any formal complaint to the Student Union, which had already approved Maryam’s talk, showing that it was an attempt at intimidating ASH organisers.

After Maryam’s talk began, ISOC “brothers” started coming into the room, repeatedly banging the door, falling on the floor, heckling her, playing on their phones, shouting out, and creating a climate of intimidation in order to try and prevent her from speaking.

She continued speaking as loudly as she could. They repeatedly walked back and forth in front of her. In the midst of her talk, one of the ISOC Islamists switched off her PowerPoint and left. The University security had to intervene and remain in the room as she continued her talk.

Eventually the thug who had switched off her PowerPoint returned and continued his harassments. At this point, Maryam stood her ground, screamed loudly and continued insisting that he be removed even when the security said he should stay because he was a student. When he was finally escorted out of the meeting, discussions on many issues from apostasy, the veil to Islamism and Sharia laws continued, including with some of the ISOC “sisters” who remained behind.

In the Q&A, a women’s rights campaigner who had been kidnapped by Islamists in Libya and held for three days said that the attempts at intimidation reminded her of those dreaded days.

Another CEMB activist said one of the ISOC thugs disrupting the meeting threatened him by pointing a finger to his head.

The behaviour of the ISOC “brothers” was so appalling that a number of Muslim women felt the need to apologise, to which I explained that no apology was needed from those who were not to blame.

Absurdly, this very group which speaks of “safe spaces” has in the past invited Hamza Tzortzis of IERA which says beheading of apostates is painless and Moazem Begg of Cage Prisoners that advocates “defensive jihad.”

The ISOC’s use of rights language are clearly a cover to silence any critic and opponent of Islam and Islamism and to normalise the far-Right Islamist narrative under the guise of Islamophobia and offence.

Despite the many attempts of the ISOC “brothers,” the meeting ended successfully and raised critical issues, including that criticism of Islam and Islamism are not bigotry against Muslims who are often the first victims of Islamism and on the frontlines of resistance. The meeting also helped expose the Islamists for what they are – thugs who cannot tolerate dissent.

Nonetheless, the Islamists at ISOC will need to learn that apostates, and particularly women, have a right to speak and that we will not be intimidated or back down.

Freedom of expression and the right to criticise and leave Islam without fear and intimidation is a basic human right. We have a responsibility to fight for these universal values at British universities and also across the globe.

Here is video of the talk: