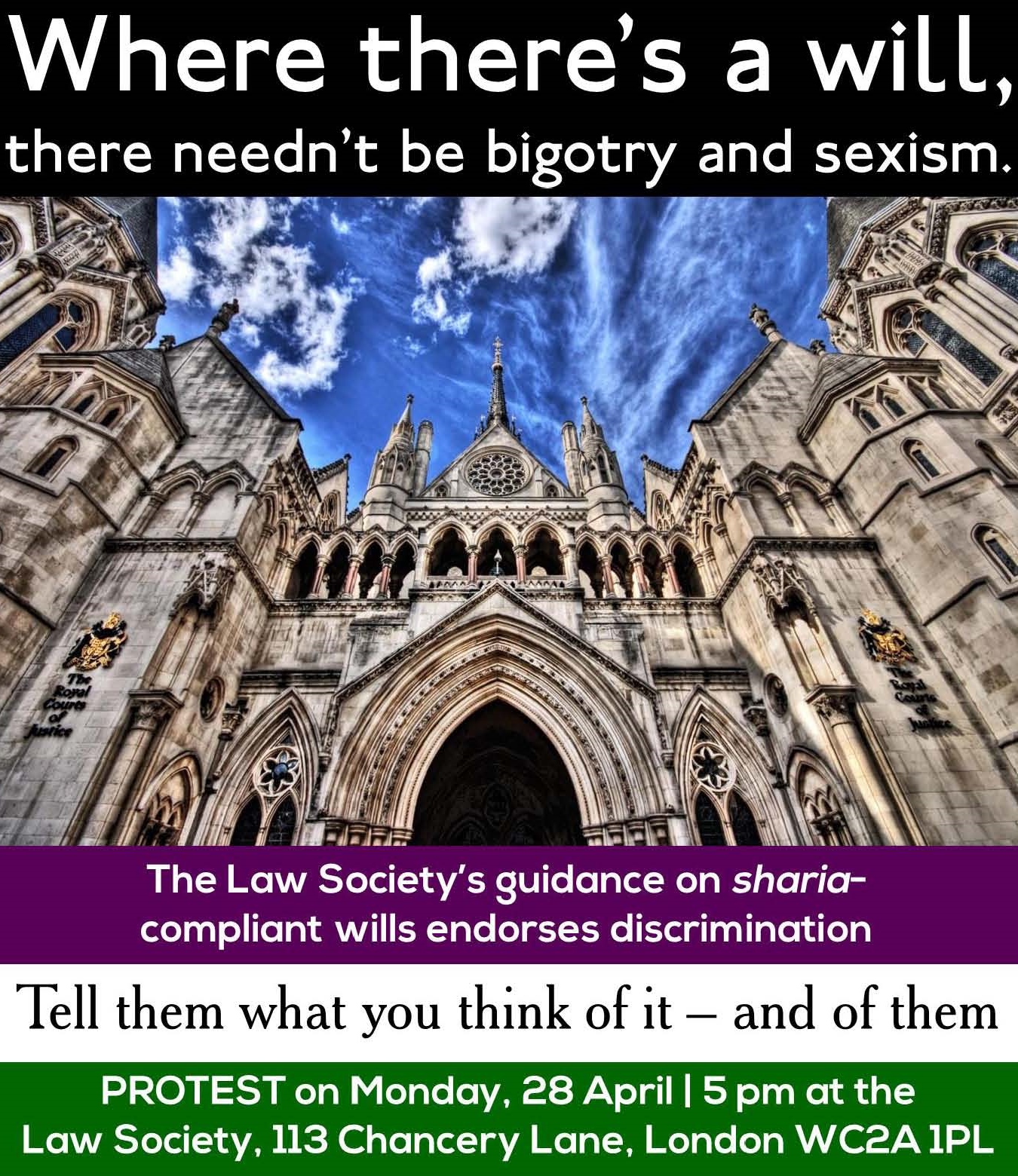 Press Release: Wills without bigotry – protest against the Law Society

About 70 protesters rallied outside the office of the Law Society to condemn their endorsement of discriminatory sharia law on April 28 2014.

The protest was organised by anti-racist, feminist and human rights groups, namely One Law for All, Southall Black Sisters, Centre for Secular Space, and London School of Economics SU Atheist, Secularist and Humanist Society.

Chris Moos was the master of ceremonies of the rally.

At the protest, Pragna Patel, director of Southall Black Sisters called upon the Law Society to withdraw its guidance:

Maryam Namazie, founder of One Law for All and Fitnah – Movement for Women’s Liberation argued:

There is no place for Sharia in Britain’s legal system just as there is no place for it anywhere. Sharia – like all religious laws – is based on a dogmatic and regressive philosophy and a warped understanding of the concepts of equality and justice. It is primitive and patriarchal and based on inequality, retribution and religious [im]morality. It is not a rule for equals and has no place in a modern state or system of law. Law Society listen up: you must immediately withdraw your shameful guidance. Now! In the words of Algerian women singing for change: “We aren’t asking for favours. History speaks for us”.

The Law Society is violating its own equality policies by providing guidance on Sharia-compliant wills and offering training courses in Sharia law for high street lawyers. It is colluding with Sharia law principles that discriminate against women, non-Muslims and children who are adopted or born to unmarried parents. This is a direct attack on the equal rights of many Muslims, especially women. The Law Society is supposed to uphold the equality values of British law. Instead, it is undermining them. The Law Society would never provide guidance to facilitate racist or homophobic-compliant wills. Why the double standards?

Kate Smurthwaite, comedian and activist, appealed to the Law Society:

Religious bigots are highly skilled at trampling on the rights of women, children and non-believers. They don’t need The Law Society to help them. The value of daughters is THE SAME as the value of sons. All marriages, religious, non-religious, gay or straight are marriages. And every child is legitimate. Faced with bigotry it is the job of all of us – including the Law Society – to challenge it. The protestors today did exactly that. When will The Law Society follow suit and rip up this ‘guide to discrimination’?

I come from a country which has seen this divisive trend being taken to its logical conclusion – where a woman’s rights to, among other things, alimony and inheritance, depend entirely on her religion, there being different laws for each community. The resulting discrimination has visited appalling suffering upon Muslim women in particular. I have no wish to see it replicated here. A man may choose to be as spiteful and chauvinistic as he wishes, but it is not something our public institutions should encourage or condone. I hope the Law Society will withdraw this Note before it causes any further damage.

In issuing its guidance on Sharia-Compliant Wills, the law society is lending respectability to something that should have none: the view that women are in some way second class citizens.

I am here today to represent thousands of women and girls from the Middle East, North Africa and Afghanistan who live here in the UK. Many of these women, like me, have fled countries where Sharia law is practiced. […] There is a lot of money to be made by lawyers from drafting Sharia compliant wills. We cannot allow for women’s rights to be sacrificed so that lawyers can cash in. The Law Society must never step beyond its remit of secular law. It has no just reason to legitimise any religious law.

Ramin Forghani, Vice-Chair of the Scotland Secular Society, who had travelled from Glasgow to join the protest, asserted:

I’m Iranian and I well know what happens when the barrier between religion and legal system gets destroyed. Shame on the Law Society!

As a Bengali-Muslim resident in the UK, I faced enough discrimination in this country in relation to ethnicity, gender and migration for the last seven years. I cannot tolerate further discrimination in relation to my religion and sex. […] When Muslim countries like Bangladesh are moving away from religious law and moving towards secularism and gender equity by overcoming religious rules, how can the Law Society in the UK provide guidance for legitimising Sharia Law in a state which is meant to provide secularism and human rights for all?

Other speakers at the rally included Jason Scott of the London Atheist Activist Group and Yasmin Rehman of the Centre for Secular Space.

The rally finished with protesters tearing pages from a copy of the Equality Act and pinning them to the fence of the Law Society, symbolising the contravention of the Act by the Law Society.

As the master of ceremonies of the rally, Chris Moos concluded:

Our protest has sent a clear and loud signal to the Law Society that secularists and equality campaigners will not stand by and watch while the Law Society is undermining the basic principle of secular equality enshrined in the law. We hope that the Law Society will accept our legitimate concerns and address them by immediately withdrawing the practice note. The Law Society needs to act now, or face even more scrutiny from secular and human rights campaigners.

The open letter kick-starting the campaign against the Law Society on March 23rd was signed by scientist Richard Dawkins; Egyptian activist Aliaa Magda Elmahdy; writer Taslima Nasrin; Founder and Director of Basira for Universal Women Rights Ahlam Akram; founder of Secularism is a Woman’s Issue Marieme Helie Lucas; and Raheel Raza, President of Council of Muslims Facing Tomorrow amongst others.

Pictures of the protest can be found here and here.

For more information, contact:
Maryam Namazie
One Law for All
maryamnamazie@gmail.com
077 1916 6731
@MaryamNamazie