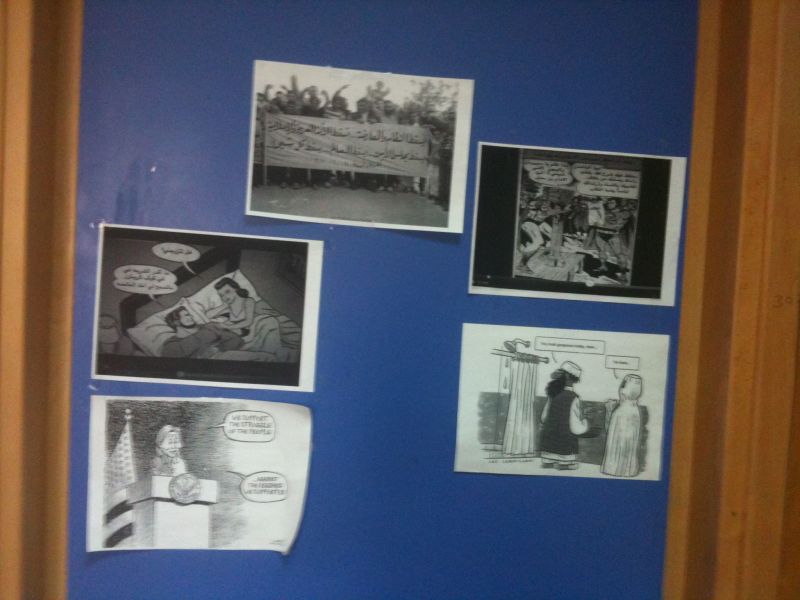 Musa Budeiri and Free Expression must be defended

Musa Budeiri, a professor at Birzeit University, the oldest Palestinian University, has been asked by the university to issue an apology to Islamist students who were offended by cartoons posted on his door. The Islamists distributed leaflets on campus saying that the cartoons were ‘an insult to Islam’ and that the professor should apologize and be punished.

Whilst Budeiri refused to apologise or go abroad for a semester, he agreed to give an explanation for the educational objectives in posting cartoons. He said:

“They have opened up a discussion and have exhibited an ability of students to exercise their empowerment, potentially to ask, question, object, discuss, defend, in order to express their ideas and beliefs. This is something I have always fought for, and tried to convey since the first days of my teaching career, Much more than the ‘knowledge’ confined in the pages of official textbooks.

“It is a shame that instead of pursuing this path, and advancing their ideas by argument and reasoning, and winning as many adherents to their point of view as are convinced, (and these will never constituted the whole community, because people are individuals and not robotic replicas, and each mind is an individual creation possessing its own unique characteristics), they chose to resort to abuse, and threats of physical violence, attempting to appropriate to themselves the sole authority of what Muslims can and cannot think, can and cannot do. There are and will remain as many different Muslims as there are unfettered minds.”

Whilst Budeiri says the university never informed him that he wouldn’t be teaching again as some Islamist students have claimed, he has received no response about his contract for the next academic year, which starts next month.

The Council of Ex-Muslims of Britain condemns the University’s lack of courage and calls for the unequivocal defence of Budeiri and free expression.