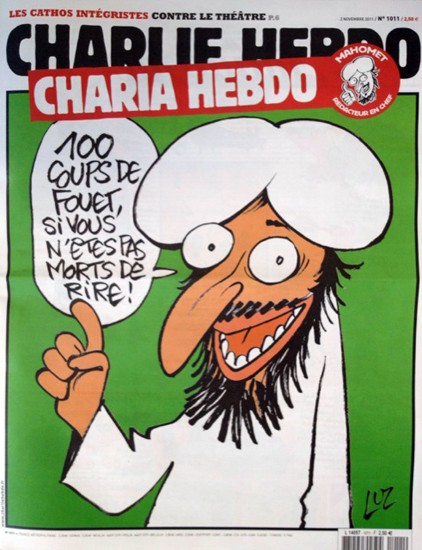 In support of Charlie Hebdo, French Publication firebombed in Paris

No one has yet claimed responsibility for the firebombing of Charlie Hebdo’s office but the attack does bear the hallmarks of the political Islamic movement as – for them – this is business as usual and all in a day’s work. They bomb offices, threaten anyone who criticises Islam and Islamism, and where they have political power they slaughter those who speak their minds in cold blood and in broad daylight.

Those who condemn the firebombing of Charlie Hebdo’s office whilst also criticising the publication for mocking Islam’s prophet Mohammad are (at best) missing the point (and more likely apologists for the Islamists).

Saying that certain types of expression offend is a tool for suppressing society and is an attempt to limit rights. And it’s linked to the undermining of freedoms, rights, and social welfare world-wide. After all what is the point of free expression if you cannot criticise that which is deemed to be taboo?

Saying Charlie Hebdo shouldn’t criticise Islam is basically saying that Islam is off limits. It’s saying that the victims and survivors of Islamism are not allowed to resist the inquisition of our era, particularly since free expression, including the right to mock, is often all we have to fight back.

If you’re not angry, you’re just not paying attention.

Maryam Namazie is Spokesperson of the Council of Ex-Muslims of Britain, One Law for All and Equal Rights Now – Organisation against Women’s Discrimination in Iran.