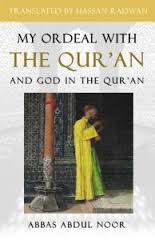 Translation of “My Ordeal with the Quran, and with Allah in the Quran”

In defence of freedom of expression, members of the Council of Ex-Muslims, led by Management Committee Member, Hasan Radwan, are undertaking the translation of the Arabic book: “My Ordeal with the Quran, and with Allah in the Quran” by an Egyptian ex-Muslim who used the pen name of Abbas AbdulNoor. This book was banned and prevented from publication in Arab countries due to its critical analysis of the Quran. According to Hassan Radwan, “We believe this book to be an important contribution to the debate about Islam and Muslims, which will benefit both those who wish to escape the shackles of religion as well as those who wish to reform Islam.