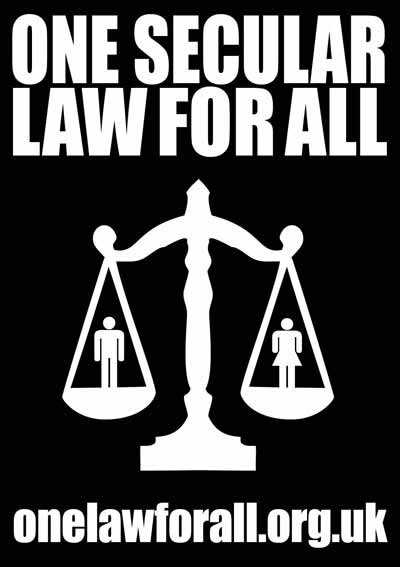 The One Law for All campaign, which is seeking legislation to curb the influence of sharia law in Britain , will be launched at the House of Lords on International Human Rights Day, December 10, 2008.

According to campaign organiser, Maryam Namazie, ‘Even in civil matters, Sharia law is discriminatory, unfair and unjust, particularly against women and children. Moreover, its voluntary nature is a sham; many women will be pressured into going to these courts and abiding by their decisions. These courts are a quick and cheap route to injustice and do nothing to promote minority rights and social cohesion. Public interest, particularly with regard to women and children, requires an end to Sharia and all other faith-based courts and tribunals. ‘

The campaign calls on the UK government to recognise that Sharia law is arbitrary and discriminatory and for an end to Sharia courts and all religious tribunals on the basis that they work against and not for equality and human rights.

The campaign also calls for the law to be amended so that all religious tribunals are banned from operating within and outside of the legal system.

In the words of the Campaign Declaration: ‘ Rights, justice, inclusion, equality and respect are for people, not beliefs. In a civil society, people must have full citizenship rights and equality under the law. Clearly, Sharia law contravenes fundamental human rights. In order to safeguard the rights and freedoms of all those living in Britain , there must be one secular law for all and no Sharia. ‘

Roy Brown, immediate past president of the International Humanist and Ethical Union said, “IHEU is lending its full support to this campaign. It is intolerable that the very values on which UK society is based – human rights, equality and the rule of law – are being undermined by the quiet and insidious application of systems of law that have no basis in equality or justice.”

Terry Sanderson, president of the National Secular Society, which is also supporting the One Law for All campaign, said: “It is a grave error for the authorities in this country to give credence to Sharia in any form – whether legally or in terms of informal arbitration. When women are being subjected to violence in their marriages, it is not acceptable for religious authorities – which are, by definition, misogynistic – to arbitrate. A two-tier legal system, with women ‘ s rights being always secondary to religious demands, is unnecessary, undesirable and ultimately unjust.”