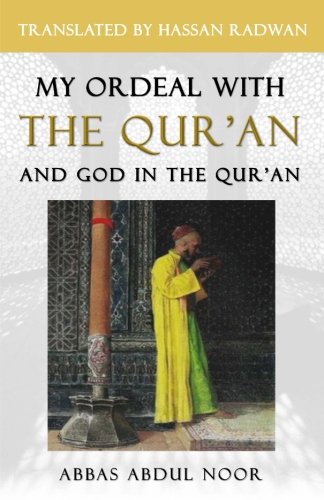 My Ordeal with the Quran, By Abbas Abdul Noor

Written by CEMB on February 3, 2016. Posted in Resources.

Brief abstract: This is the first English translation (by Hassan Radwan) of the book, “My Ordeal with the Quran Complete Full Version.” By Abbas Abdul Noor. The book has been in available Arabic on the internet for about ten years in PDF form. The first page identifies the text as a draft copy, indicating that it was not finalised for printing and it appears the book was refused publication in Egypt and other Arab countries, which is not unexpected given the difficulty of publishing critical commentary on the Qurʾān in such regions.  Beneath the words “Draft Copy,” it says: “Damanhur, Arab Republic of Egypt, 2004.” Apart from the biographical details given by the book itself, little is known about its author. The text identifies the author by the name “Abbas Abdul Noor.”  However it seems likely that this name is an alias used to conceal the author’s identity due to fear of repercussions from publishing such a forthright analysis.