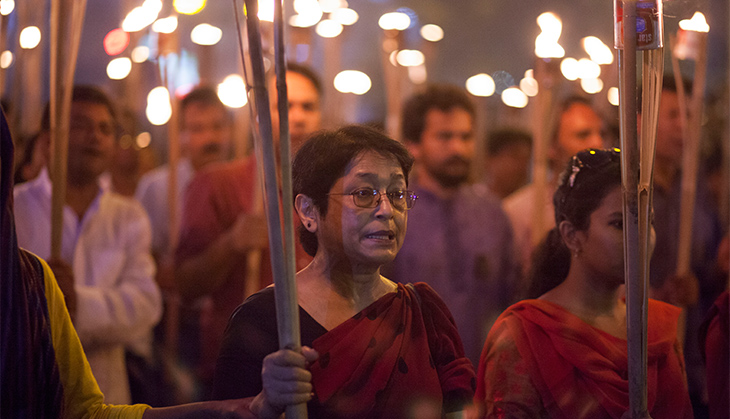 Stop executing “apostates” and “blasphemers” and release them now!

On 22 February 2015, a Saudi court sentenced a man in his twenties to death by beheading for apostasy.  The identity of the man has not been made public but, according to Al-Shabaka, he was arrested last year and is charged with becoming an atheist and insulting Muhammad, Islam’s prophet, on social media.

This heinous ruling comes against the backdrop of the recent attacks on freedom of expression in Paris and Copenhagen.  Whilst the Saudi government hypocritically condemned the Paris massacre as a “cowardly terrorist attack that was rejected by the true Islamic religion”, it condemned a man to death for similar “crimes” only a matter of weeks later. This ruling follows the recent case of Raif Badawi, a blogger sentenced to 1,000 lashes and 10 years’ imprisonment for a website promoting public discussion of religion and politics which has been deemed “insulting to Islam”.

Apostasy and blasphemy are punishable with death in Saudi Arabia and also in a number of other countries, including Iran and Mauritania.

In Iran, 30 year old blogger Soheil Arabi, has been sentenced to execution for “insulting the prophet” on Facebook.

In December 2014, a 28 year old Mauritanian journalist Mohamed Cheikh Ould Mkhaitir was sentenced to death for “insulting the prophet”.

The Council of Ex-Muslims of Britain is outraged at these death sentences. “Apostates” and “blasphemers” have not committed any crime and should be immediately released. The real crime is imprisoning and executing people for their beliefs and expression.

Clearly, there is no place in the 21st century for such medieval laws. Apostasy and blasphemy laws must end. And they must end now.

To demand the release of the unnamed atheist facing execution, please contact the Saudi embassy in your country of residence or Tweet @SaudiEmbassyUK.

Sign the petition in support of Raif Badawi here.